Mathematical modeling is a process that allows students to describe and make sense of the relationship between an independent variable and a dependent variable found in a real-world setting. This standard specifies that high school students should be able to model situations using a variety of functions that include linear, quadratic, exponential, absolute value, inverse, power, square root, and other common functions. Students need to be able to fluidly translate among tables, graphs, and equations of these functions in order to match key features of these functions to real-world situations. The key features that separate these function types include intercepts, asymptotes, restricted domain, and rate of change. As students learn to make connections between the representations of the models and the real-world situation they begin to understand how variables in their life are connected to the mathematics they study in school as well as extend their knowledge of function types themselves.

9.2.2.1
Represent and solve problems in various contexts using linear and quadratic functions.
For example: Write a function that represents the area of a rectangular garden that can be surrounded with 32 feet of fencing, and use the function to determine the possible dimensions of such a garden if the area must be at least 50 square feet.

9.2.2.3
Sketch graphs of linear, quadratic and exponential functions, and translate between graphs, tables and symbolic representations. Know how to use graphing technology to graph these functions.

NCTM Standards: (those that apply to 9.2.2 are bolded)

(p.296, PSSM) Instructional programs from Pre-K through grade 12 should enable all students to

Understand patterns, relations, and functions.  In grades 9-12 all students should

Represent and analyze mathematical situations and structures using algebraic symbols. In grades 9-12 all students should

Use mathematical models to represent and understand quantitative relationships. In grades 9-12 all students should

Analyze change in various contexts. In grades 9-12 all students should

Interpret functions that arise in applications in terms of the context.

·         F-IF.4.      For a function that models a relationship between two quantities, interpret key features of graphs and tables in terms of the quantities, and sketch graphs showing key features given a verbal description of the relationship. Key features include: intercepts; intervals where the function is increasing, decreasing, positive, or negative; relative maximums and minimums; symmetries; end behavior; and periodicity.★

·         F-IF.5.      Relate the domain of a function to its graph and, where applicable, to the quantitative relationship it describes. For example, if the function h(n) gives the number of person-hours it takes to assemble n engines in a factory, then the positive integers would be an appropriate domain for the function.★

·         F-IF.6.      Calculate and interpret the average rate of change of a function (presented symbolically or as a table) over a specified interval. Estimate the rate of change from a graph.

·         F-IF.8.      Write a function defined by an expression in different but equivalent forms to reveal and explain different properties of the function.

·         F-IF.9.      Compare properties of two functions each represented in a different way (algebraically, graphically, numerically in tables, or by verbal descriptions). For example, given a graph of one quadratic function and an algebraic expression for another, say which has the larger maximum. 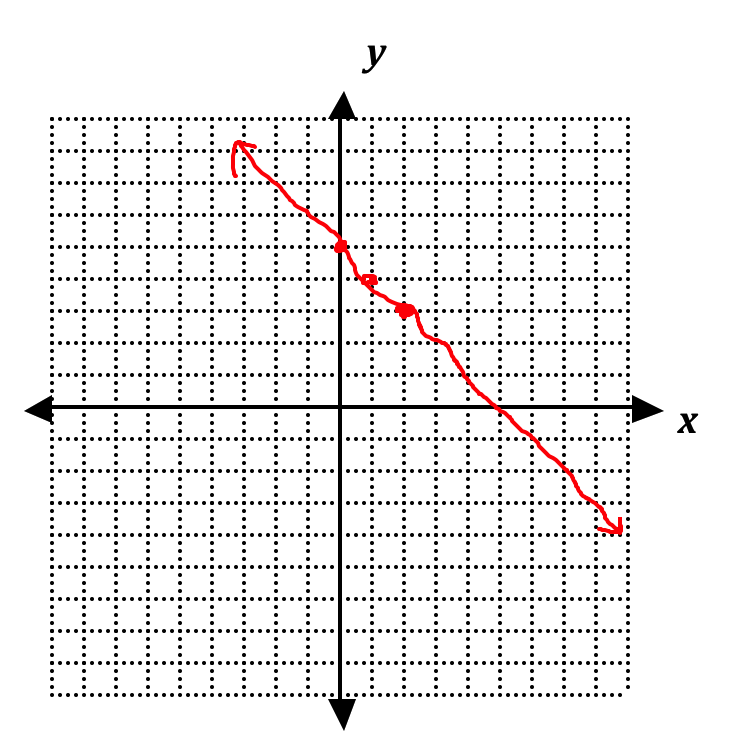 Students should be able to use this same line of reasoning for most common functions. For example, if students are asked to sketch the graph of f(x) = -2(x + 3)2 + 5 they should be able to reason that the expression (x + 3)2 is non-negative and the minimum this expression can be is zero when x = -3. They should then be able to reason that the graph has an important point at (-3,5) called the vertex. As the values of x move away from -3, the value of the expression -2(x + 3)2 becomes more negative. This means that the parabola is pointing down. They should be able to make a pretty accurate sketch by calculating and plotting a point with an x-value greater than -3 and one that is less than -3. 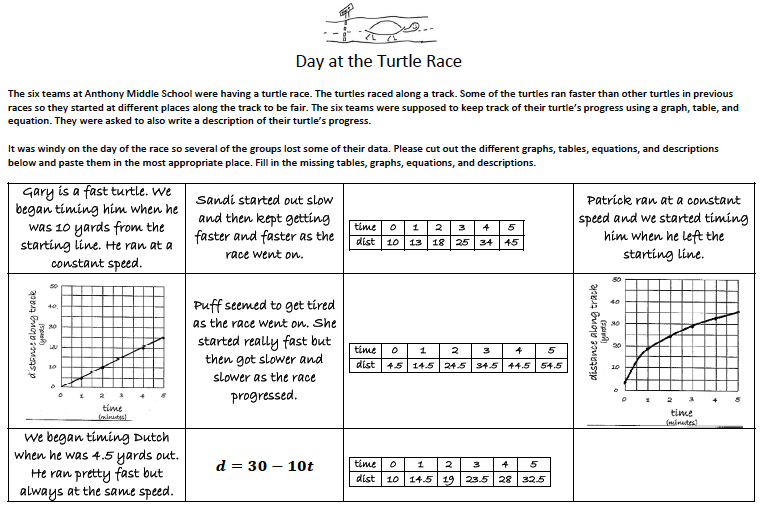 The students are asked to find a table and equation that matches the graph shown below.

Students need to be able to reason that this graph could be quadratic or a square root function. Students who choose to use a square root model should notice that the graph passes through the point (0,4.5) and not the origin and reason that the square root function $f(x)=\sqrt{x}$ needs to be translated vertically and use $g(x)=\sqrt{x}+4.5$ as their first guess. Eventually they should be able to change the parameters of the function to get something close to $d(t)=14\sqrt{t}+4.5$ for a function.

A shift in which a plane figure moves horizontally.

A shift in which a plane figure moves vertically.

parameters: a set of independent variables that express the coordinates of a point.

Downloads
Day at the Turtle Races

The teacher continues to ask similar questions and continue to monitor student progress with this vocabulary and concept.

To answer this question students need to figure out what the independent and dependent variables are. The use of a simulation is one way to solve this problem. There are many ways to use random number generators to simulate the spread of the virus. One possible solution is found in the following table and graph.

Students should be able to figure out from this simulation that it took 13 days for the entire town of 100 people to get infected. Furthermore they should be able to explain why the number of infected people appears to be exponential for the first four days then why it becomes more linear between days four to eight. The student should also be able to explain why the days after day eight appear curved. They should be pushed to use translations to describe a piecewise defined function to show a rule of three parts that matches the trend.

Students who extend their knowledge of this standard should be able to apply what they learn in novel situations.