Benchmark: 8.3.2.2 Polygons on a Coordinate Grid

Analyze polygons on a coordinate system by determining the slopes of their sides.

For example: Given the coordinates of four points, determine whether the corresponding quadrilateral is a parallelogram.

Given a line on a coordinate system and the coordinates of a point not on the line, find lines through that point that are parallel and perpendicular to the given line, symbolically and graphically.

What students should know and be able to do [at a mastery level] related to these benchmarks.

Expectations: In grades 6–8 all students should—

#5: Prove the slope criteria for parallel and perpendicular lines and use them to solve geometric problems (e.g. find the equation of the line parallel or perpendicular to a given line that passes through a given point)

Student:  They are both rectangles.

Teacher:  How do you know?

Student:  Well, it just looks like one.  You know the opposite sides are the same length.

Teacher: OK, what else do you know about rectangles?

Student:  Opposite sides are parallel and they have four right angles.

Teacher:  We need to move beyond that it “looks like” a rectangle and prove that it has the characteristics you described.  We are going to focus on the opposite sides being parallel and the adjacent sides being perpendicular or creating a right angle.  Let’s look at these four sets of lines.

Teacher:  What do you notice about the sets of lines?

Student 1:  Graphs X, Y, Z are all parallel lines and Graph W is not.

Teacher:  How do you know?

Teacher:  You mentioned that a rectangle also has 90-degree angles.  So we have to prove that the adjacent sides are perpendicular.  Let’s look at another set of lines on a coordinate graph.  Which of these graphs “look” perpendicular

Student:  Well, it looks like the first three, graphs C, D, and E are perpendicular but I’m not totally sure.

Teacher:  Let’s look at the relationship between the slopes again.  Find the slopes of each set of lines.  What do you notice?

Student: So it looks like one of the lines has a positive slope and one has a negative slope.  This is true for all of them, though Graph F doesn’t seem like it’s perpendicular.  It also looks like Line 1 and Line 2 are also “flips” of each other.

Teacher:  What do you mean by “flips”?

Student:  I think it’s called reciprocal.  The fraction is flipped and reciprocals multiply to be one.

Student:  We already know the slopes because we found them to check parallel lines.  In Graph A, the adjacent sides have slopes of 2/3 and -7/5.  They are negative, but they are not reciprocals so they can’t be perpendicular.  It really looks like a rectangle but it can’t be because the lines don’t form a right angle.   Let’s check Graph B.  The slopes of the adjacent sides are 2/3 and -6/4.  Again, they are negatives, but they don’t look like reciprocals.

Student: Yes.  I can write an equivalent fraction of -3/2.  Oh, that is a reciprocal.  So yes, Graph B is a rectangle.  Even though they both look like rectangles, they aren’t.  I see why I have to check the relationship between slopes in order to make sure it fits the characteristics of the shape.

Attachment A, Characteristics of Quadrilaterals

Attachment B, The Final Analysis

A video explaining parallel and perpendicular lines with examples such as finding slopes given two points and determining if the lines would be parallel/perpendicular or given a line and a point write the perpendicular equation.  Steps for solving are shown.

Geogebra lesson   A geogebra applet that allows students to create parallel and perpendicular lines in a coordinate grid, calculate the slopes, and look for a relationship between the slopes.

A website that shows graphs of parallel and perpendicular lines and asks users to predict whether two lines are parallel or perpendicular.  At the bottom of the page is a link to a supplemental worksheet.

Another practice worksheet on finding the parallel/perpendicular equations. 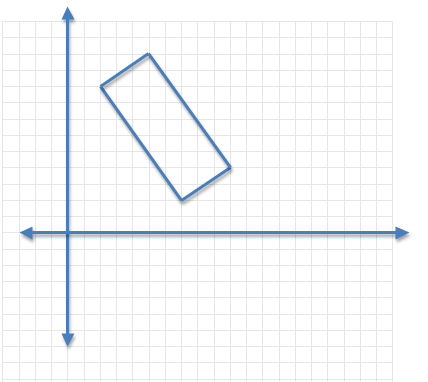 Reciprocal - Two numbers whose product is 1

Reflection – Critical Questions regarding the teaching and learning of these benchmarks

Parallel lines have the same slope while the slope of perpendicular lines are negative reciprocals and...  . (n.d.). Interactive Math Activities, Demonstrations, Lessons with definitions and examples, worksheets, Interactive Activities and other Resources. Retrieved June 13, 2011 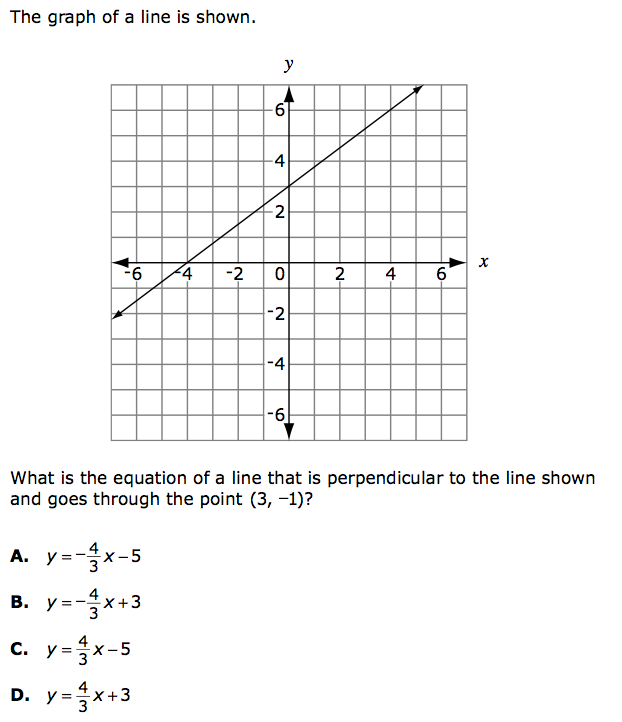 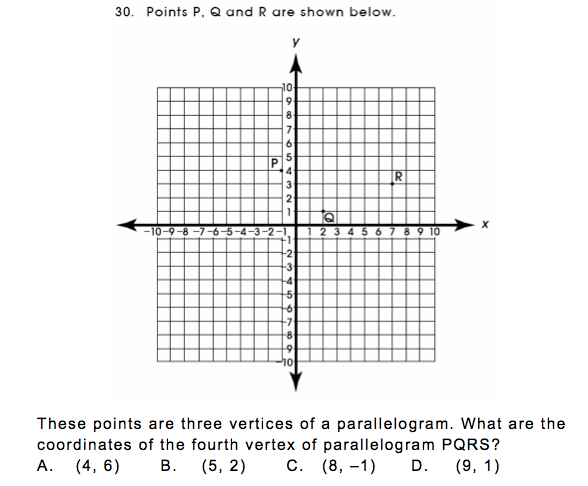 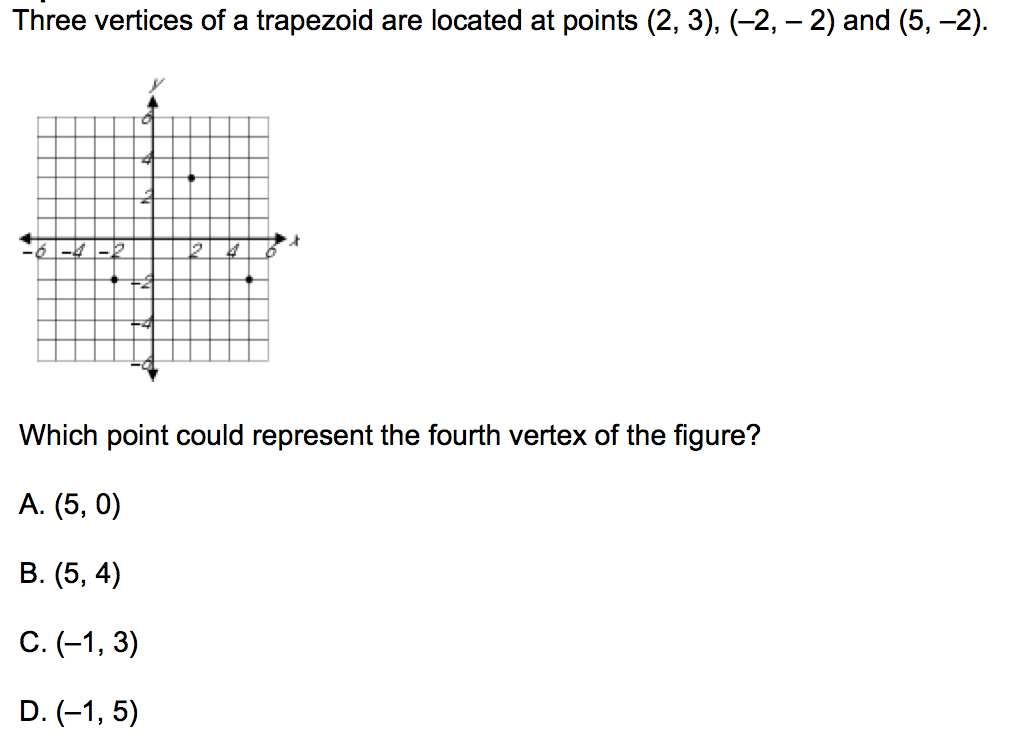 What quadrilateral is formed by the following four equations?

Which are the coordinates of the vertices of a parallelogram?

5 multiple choice questions on  Parallel and Perpendicular Lines: Find the slope of a perpendicular line, given the equation of a line

This is a basic maybe good intro to parallel and perpendicular lines.

Some students may find they can best express the concept of parallel lines by counting the slope “up and over.”  For students who are still learning how to use formulas, this strategy is acceptable.  The same procedure can be used to show congruent segments, without actually “plugging into” the distance formula.

Students having difficulty identifying quadrilaterals which are obliquely oriented (those not oriented with horizontal or vertical sides) may find it helpful to draw on a transparency and rotate the transparency against another with the coordinate axes.

For students who are developing understanding, provide a formula sheet for the post assessment to find slope, distance and reduce the number of exercises and allow counting techniques with appropriate support.

Use geometric software to provide practice and a different media for addressing a variety of learning styles.

Have students who confuse the terms parallel and perpendicular make vocabulary cards and use them to find examples in letters and mathematical symbols. For example, the plus sign has perpendicular lines and the equal sign has parallel lines.

Use sentence frames to help with their vocabulary:

Have students practice speaking in English by working in partners or in small groups as they practice how to do a particular type of math problem. Encourage them to use math phrases as much as possible as they explain the process aloud. Ask students to repeat a problem or process back to you after you explain it. Ask questions about the problem or the lesson to ensure all of the students understand what you have taught.

Have students make a Frayer Model for parallel and perpendicular lines.  Or have them make one for each polygon and the characteristics of each.  Here is a website that gives directions and examples of the Frayer Model.

For students with advanced understanding, give guidelines for a quadrilateral and have students create the quadrilateral.  For example, the quadrilateral has an area of at least 16 square units, one set of parallel sides, is rotated 30 degrees off the axis and is contained in two quadrants. (taken from this site)

Use transparencies or graphing technology to explore transformations of the quadrilaterals by rotating, translating, or reflecting them and checking which properties stay the same.

Use local maps to plan trips, analyzing what kinds of polygons the round trips would form and using the coordinates to compute distances for the legs of the trip.

Linear functions: slopes of parallel and perpendicular lines practice problems with explanations if wrong. IXL is a resource that is free initially, but after a certain amount of use in a day becomes a site that needs to be purchased.

Video on finding the equation of lines parallel/perpendicular to a given line.  This video uses point-slope form to find the equations.