For example: The relationship between the area of a square and the side length can be expressed as f(x)=x2. In this case, f(5)=25, which represents the fact that a square of side length 5 units has area 25 units squared.

Use linear functions to represent relationships in which changing the input variable by some amount leads to a change in the output variable that is a constant times that amount.

For example: Uncle Jim gave Emily $50 on the day she was born and $25 on each birthday after that. The function f(x)=50+25x represents the amount of money Jim has given after x years. The rate of change is $25 per year.

Understand that a function is linear if it can be expressed in the form f(x)=mx+b or if its graph is a straight line.

Understand that a geometric sequence is a non-linear function that can be expressed in the form f(x) = abx, where

Student learning is focused on the concept of function. Students must explore linear and non-linear functions to understand the relationship between the independent and dependent variables. This idea of every input having exactly one output is essential. Students must understand that changing the input leads to a change in the output. Linear and non-linear relationships should not be new learning for students. As 6th graders, students have been exposed to different types of patterns and explored ways to write rules for these patterns. In 7th grade, the focus moved to proportional linear functions and the equation y = mx. In 8th grade, they extend this learning to other linear and non-linear functions. However, they have not made the connection between equations of functions and function notation. It is important for students to make the connection that function notation is another way to write the linear and non-linear equations that they have already studied. Students will deepen their knowledge of function as they explore arithmetic and geometric sequences. The connecting of arithmetic sequences to linear functions as well as geometric sequences to exponential functions is crucial here. Ultimately, this standard focuses on students using and identifying functions and function notation.

Teacher: How many of you remember learning about a function box or function machine? It may have looked something like this:

How did a function machine work?

Student: Well, we would put a number in and another number would come out.

Teacher: Did you ever wonder why it was called a function machine?

When working with a function, for everything you put in you get exactly one thing out. Did you ever get more than output for each input when you were putting numbers through the function machine?

Student: But sometimes we were given the input and outputs and we had to figure out the rule.

Teacher: How did you figure out the rule?

Student: We would try to figure out the pattern and what we could do to all the "ins" to get the "outs" and make it always work. 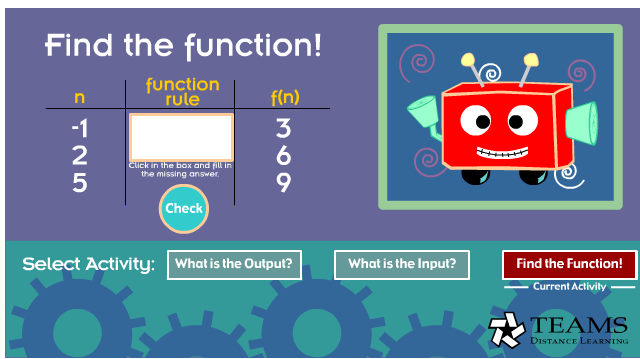 Teacher: What would be the rule for this function machine?

Student: That's easy. It's plus four.

Teacher: What does that mean?

Student: For every number you put in, add 4 and you will get the output.

How would you describe this relationship if it were a table of values?

Student: Well, it still adds four like the function machine, but we would write an equation for it like this: y = x + 4 .

Teacher: OK, so you have moved from writing a rule to writing an equation. They both mean the same thing. The equation is just more sophisticated because it represents all the possible values for that rule.

Student: Yeah. You can graph it and it will be a line that goes on forever. We could use the table to make tons of coordinate pairs using the equation.

Teacher: Next we need to move from writing equations to writing the relationship in function notation. So what does that mean?

Students: I'm not sure.

Teacher: Let's look at a few linear relationships written in function notation. What do you notice?

Student: I notice that it looks a lot like the equations we wrote before, they just have that weird thing in the front with the letters instead of just a y. It looks much more confusing.

Student: I noticed that there is an x on both sides and another variable that looks like it is multiplying by that x.

Teacher: I'm glad you brought that up. In this case, those parentheses do not represent multiplication and the f is not another variable.

Student: So what does that mean? Why did you use different letters?

Teacer: The letters name the function. This is actually a helpful tool that makes functions a little more user-friendly. If we were comparing two functions, we could name them different names and then avoid saying "the first equation or the equation with a y-intercept of 12."

But we need to go back a minute. What does it mean to be a function? We talked about it earlier with our function machines.

Teacher: Let's try it. What number should we put in?

Student: Cool. It looks like the x gets replaced with the number we put in. So then we know the input is 5 and 20 is the output. When we just use y, we don't know what was put in.

The teacher gives students time to make the table.

Student: So I could write

And that helped me to see the input and the output. Now it's kind of like there is only one variable because f(x) is the same as y.

Teacher: So let's try a few.

Students make tables for the other three function examples above then share their answers and continue the function discussion.

Guided practice and video of function problems
This lesson is designed to introduce students to the idea of functions composed of two operations, with specific attention to linear functions and their representations as rules and data tables, including the mathematical notions of independent and dependent variables.

Meat-a-morphosis: An introduction to functions
This video of created by students of an animated function machine gives a concrete example of an input-output relationship.

Secret code functions
A two-day lesson on using secret codes to introduce the concept of a function.

input - independent variable - domain: the number or value that is entered into a function. This may also be referred to as the manipulated variable (the variable that the experimenter decides to change to see if there is or is not an effect).

output - dependent variable - range: the number or value that comes out from a process. For example, in a function a number goes in; something is done to it; and the resulting number is the output. This may also be referred to as the responding variable (the variable that will change as a result of the change in the manipulated variable. It may also be observed and or measured to determine the quantity or quality of change).

function: a rule matching elements of two sets of numbers in which an input value from the first set has only one output value in the second set.

function notation: notation that uses the symbol f(x) in place of y; "f(x)" is read "f of x" and means that the value of the function (f(x) or y) depends on the input value of x; the function f(x) is the output of the function with input x.

non-linear function: any function that does not follow a linear pattern of a constant rate of change, a straight line graph and an equation of the form f(x)=mx + b.

exponential function: a function of the form y = a(bx) where a represents the y-intercept and b represents the growth factor (the number multiplied by).

1. You have returned some merchandise to a store and received a store credit of $22. In the same store, you are purchasing video games that cost $8 each. The function f (x) = 8x - 22 represents your total cost f (x) if you purchase x picture frames. How many dollars will you pay if you purchase 7 video games? 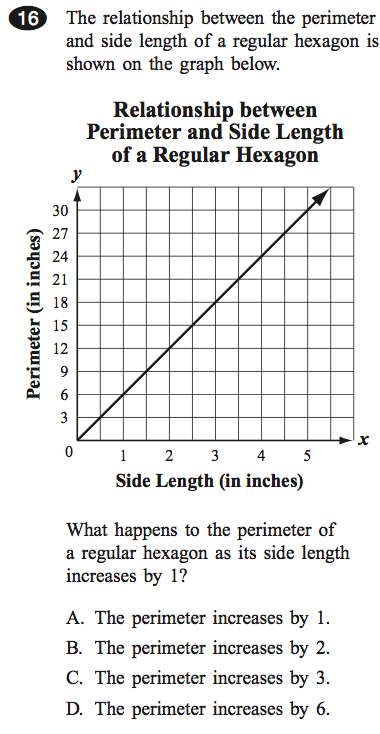 3. Which of the following represents a non-linear function?

5. The following question refers to the graph shown below. 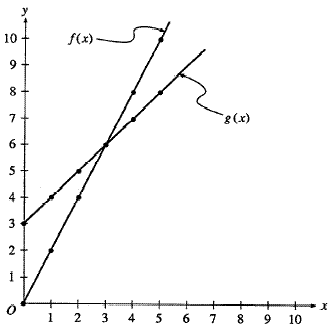