The idea that matter is made up of atoms and molecules provides the basis for understanding the properties of matter.
Grade:
7
Subject: Science
Strand: Physical Science
Substrand: Matter
Benchmark: 7.2.1.1.1 Elements & Periodic Table

Recognize that all substances are composed of one or more of approximately one hundred elements and that the periodic table organizes the elements into groups with similar properties.

Describe the differences between elements and compounds in terms of atoms and molecules.

Science states that matter is made up of atoms and molecules, which provide the basis for understanding matter.

Atoms are far too small to be observed directly with the naked eye, therefore they appear invisible to us. The enormous variety of materials in the world are the result of different combinations of a relatively small number of basic ingredients called elements. The properties of these materials are determined by the atomic and molecular structure.  These atomic properties have lead to the organization of the approximatley 100 elements in the periodic table.  A chemical reaction that produces new substances with different properties can be expressed in a chemical equation.  Atlas for Science Literacy Project 2061 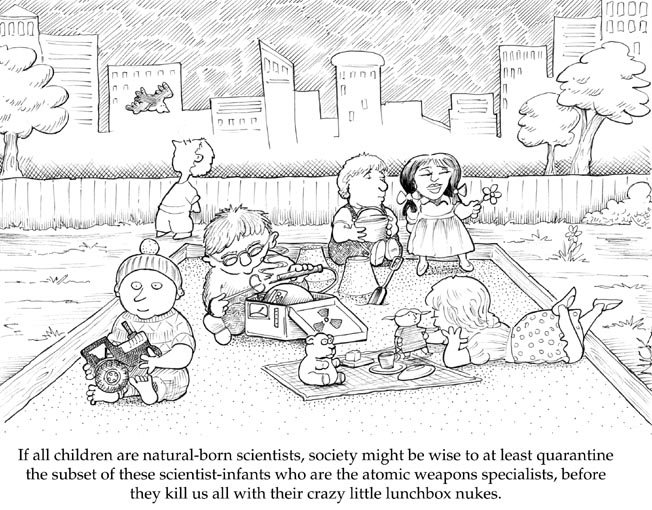 As a result of their activities in grades 5-8, all students should develop an understanding of

The structure of matter is difficult for this grade span. Historically, much of the evidence and reasoning used in developing atomic/molecular theory was complicated and abstract. In traditional curricula too, very difficult ideas have been offered to children before most of them had any chance of understanding. The law of definite proportions in chemical combinations, so obvious when atoms (and proportions) are well understood, is not likely to be helpful at this level. The behavior of gases-such as their compressibility and their expansion with temperature-may be investigated for qualitative explanation; but the mathematics of quantitative gas laws is likely to be more confusing than helpful to most students. When students first begin to understand atoms, they cannot confidently make the distinction between atoms and molecules or make distinctions that depend upon it-among elements, mixtures, and compounds, or between "chemical" and "physical" changes. An understanding of how things happen on the atomic level-making and breaking bonds-is more important than memorizing the official definitions (which are not so clear in modern chemistry anyway). Definitions can, of course, be memorized with no understanding at all.

Going into details of the structure of the atom is unnecessary at this level, and holding back makes sense. By the end of the 8th grade, students should have sufficient grasp of the general idea that a wide variety of phenomena can be explained by alternative arrangements of vast numbers of invisibly tiny, moving parts. Possible differences in atoms of the same element should be avoided at this stage. Historically, the identical nature of atoms of the same element was an assumption of atomic theory for a very long time.

When isotopes are introduced later, to explain subsequent observations, they can be a surprise and a lesson in the nature of progress in science. The alternative-teaching atoms' variety at the same time as the notion of their identity-seems likely to be prohibitively confusing to most students.

To that end, students should become familiar with characteristics of different states of matter-now including gases-and transitions between them. Most important, students should see a great many examples of reactions between substances that produce new substances very different from the reactants. Then they can begin to absorb the rudiments of atomic/molecular theory, being helped to see that the value of the notion of atoms lies in the explanations it provides for a wide variety of behavior of matter. Each new aspect of the theory should be developed as an explanation for some observed phenomenon and grasped fairly well before going on to the next.

Tiffany and Jose were just about to lift up the corner of the square that was taped to the paper in front of them. They stopped dead in their tracks and quickly put the corner back down.

"But, Mr. R, we really want to know what type of coin is under the paper!"

"Tiffany, I know you do, but we need to have a bit of discussion about the technology that can be used to do just that." Mr. R replied.

"Let's stop and think for a second. How is the coin under the paper square like an atom."

The students in Mr. R's class had been given a worksheet. Mr. R had placed a piece of paper just larger than a coin. Over the course of his life Mr. R had collected lots of coins from all around the world and now he could put them to good use in his science class room. Every student had a different coin from a different place that was hidden and taped securely to the worksheet. Mr. R was using this activity to demonstrate how science can use indirect observation and inference to create a model. The topic they had just begun to study was matter and more specifically the topic of atoms.

The rules were simple: without puncturing the hiding paper, lifting off the paper and tape, to try and determine what the coin was under the paper.

Kyan raised his hand. "The way I see it, you can't see it so it is like an atom."

Sondra raised her hand, "Atoms are too small to see with our naked eyes."

The class giggled when she said 'naked'. Remember they are seventh graders.

Henry spoke up, "Atoms are too small and we can't see individual atoms, so this coin is hidden, kind of like the atoms we can't see."

"If you can't see them, how do you know they are there," asked Mr. R. "How is that like the coin under the paper?"

"You can't see the coin, because it is hidden. Atoms aren't hidden, they are just too small to see," replied Megan.

"Squeeze it and rub it," Jordan answered.

"You could do that and then measure how big it was," Ross replied.

"I think we could squeeze it, rub it to make it show up and then make an impression in clay." Megan replied.

Landry said, "Why don't we do a pencil rubbing like we did for the tree identification lab? That wouldn't break the paper and we could get a picture of the surface of the coin."

Mr. R then pulled the class back together and they went about trying to discover what the coins were about. Student shaded with pencil lead and crayons and colored pencils. They tried different colored pencils and erased portions to try and reveal details.

"Let's share some things that you are doing that are working well or not so well."

Megan answered, "I found that if I held my pencil on its side, and just lightly shaded, that I could make out letters and the face on the coin".

Other students went around the room and shared what worked and what didn't work in their quest to discover what the coin was under the paper. With that new information and techniques, student went back to work.

A few minutes later Mr. R called them back to the center of the room to debrief about what they had discovered. They shared at their tables where they thought the coins were from based on the image and language/symbols students found on their paper.

"Now can we lift up the paper to see?" asked Landry. He was growing impatient.

A discussion followed about the information gathered.

"Now you can take the paper off and find out how accurate is your information."

The students went to that task quickly and there were lots of comments about being right or wrong as they pealed back the paper and pulled out the coin.

"How is what you did today similar to how scientists have used technology to understand atoms? Write down five things in your notebook to answer that question."

Shop classes can be a cross-curricular source for learning about elements.  The shop class could be a source of comparisons for looking at different materials and their properties. Comparing metals, for example, malleability, tensile strength, melting point in looking at atomic structure. As, perhaps a look at polymers of plastics and the relationships in molecules could happen within an industrial tech curriculum tie in.

Is air matter? Why or why not?

Which of the following is the smallest?

In the formulas listed below, identify the only pure element.

Parents can help students study elements, as well as finding help on the internet to help struggling students.