Current and emerging technologies have enabled humans to develop and use models to understand and communicate how natural and designed systems work and interact.
Grade:
7
Subject: Science
Strand: Nature of Science & Engineering
Substrand: Interactions Among Science, Technology, Engineering, Mathematics, and Society
Benchmark: 7.1.3.4.1 Use of Maps & Data Sets

Use maps, satellite images and other data sets to describe patterns and make predictions about natural systems in a life science context.

For example: Use online data sets to compare wildlife populations or water quality in regions of Minnesota.

Determine and use appropriate safety procedures, tools, measurements, graphs and mathematical analyses to describe and investigate natural and designed systems in a life science context.

Science keeps up with current technology and incorporates it to further understanding of natural and designed systems.

Science and technology go hand in hand, to explore the universe. Technology allows students to measure data with precision and accuracy that is unavailable with the human senses. By incorporating the power of technology in the science classroom, students can analyze data with powerful machines, look for patterns on a large or even global scale and communicate with other science classrooms across the state, country or even the globe to create a network for data collection.

A quote, cartoon or video clip link directly related to the standard. 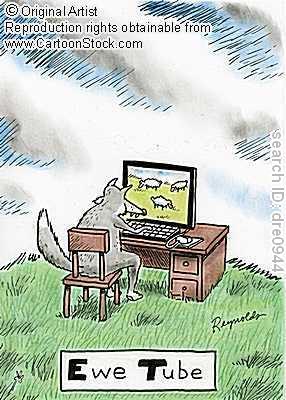 The cartoon, from this site, can be download and used free of charge by individual teachers/educators.

As a result of activities in grades 5-8, all students should develop

2.    Understandings about science and technology

Students can now develop a broader view of technology and how it is both like and unlike science. They do not easily distinguish between science and technology, seeing both as trying to get things (including experiments) to happen the way one wants them to. There is no need to insist on definitions, but students' attention can be drawn to when they are clearly trying to find something out, clearly trying to make something happen, or doing some of each.

Furthermore, as students begin to think about their own possible occupations, they should be introduced to the range of careers that involve technology and science, including engineering, architecture, and industrial design. Through projects, readings, field trips, and interviews, students can begin to develop a sense of the great variety of occupations related to technology and to science, and what preparation they require.

Mrs. J pulled up the Google map of the school grounds on her SmartBoard. "What kind of information can you take from this image?"

"Can you find my house, Mrs. J? Why can't you see the kids playing soccer outside the field right now? Yeah, and how come you can't see the cars moving? Where is the camera at? Is it on an airplane? a hot air balloon?"

"Whoa, Whoa! The question was what kind of information can you find by looking at this picture of the school?"

Tim raised his hand, "I think you could find out how much grass there is."

"How much roof there is on the middle school and high school." said Gretchen. "Or how much parking lot."

"Could you measure how much shade there is from all the trees?"asked Shane.

"Could you find out how big the football field is compared to the baseball diamond?"Russell wanted to know.

"What amazing questions you have? What do they all have in common?" There was a pregnant pause, as Mrs. J waited. It seemed forever, but she knew if she waited long enough, thinking would commence along with answers.

"They are all about measuring something. Tim wondered how much grass and everyone asked the same kind of thing," responded Andrea.

"That's correct," said Mrs. J. "But how can we measure things in this picture?" Again, another pause. Brains were cooking with answers, for sure.

Russell was the first to respond. "We can use the football field. We know how big that is from gym class."

"Yeah, we can use it kind of like ruler to measure the sizes of other things as well," Liza chimed in.

"These are great responses to those questions, but today we're going to do something a little more basic than that. Where do these images from Google come from? Earlier, some of you were wondering if they came from a plane or a hot air balloon. But they come from satellites."

"How does Google get the pictures on the computer then?" asked Stephano. "Do the satellite drop rolls of film down from space or send them back with the shuttle?"

"No, all these images are digital images. Where have you heard that term before?" asked Mrs. J.

"I have a digital camera on my phone." replied Hans. "But what does that mean?"

"What are digits?" probed Mrs. J. "What class do you use digits in?"

"So digits are numbers, and the satellite radios numbers down to a computer, just like Hans' digital camera," explained Mrs. J. She pulled up an image on her SmartBoard of a satellite scanning the landscape and then sending a series of 1s and 0s to a radio antenna. The 1s and 0s then were shown traveling through a wire to a computer where they showed up as a picture of the landscape.

"Today you are going to be a satellite. You will take a picture and turn it into 1s and 0s, give the code to a computer and they will translate the digits back into a picture." Mrs. J then proceeded to hand out simple black and white images of animals. She then also handed them pieces of graph paper transparency. She instructed the students to place the transparency over the black and white picture. "Zero will be the start and end of a row. As you move from left to right across the row, if there is nothing in the square, the value will be one. If there is some part of the animal, then the value will be 2."

"How much of the square needs to be filled before you call it a one or a two?" asked Hans.

"You are the satellite, you need to decide that and be consistent."

"But Andrea's transparency squares are smaller than mine, what will that do to the picture and the computer image?" asked Stephano.

"What do you think will change between the sizes of transparency graphs?" asked Mrs. J.

Russell spoke, "I think the smaller the squares the sharper the picture will be."

"So, kind of like the pixels on my camera? The more there are the sharper the picture?" asked Hans.

"It is a little square on my television. Since we went to digital TV, my dad is always yelling about the picture getting pixelated," responded Liza.

"You are right, Liza. A pixel is a small piece of data. What are the pixels you are working with right now?"

"Well, by turning what is in the square, which is the pixel, into a number, we're creating a digital image," added LeTroy.

"When you are done with the numbers of your transparency, remove the picture and hand the graph paper to someone else, along with a clean sheet of paper graph paper. Their job is to turn the numbers back into a picture, by coloring in all the 2's," instructed Mrs. J.

The students went about their work, digitizing zebras and penguins and chickens, then handing the numbers to a classmate who turned the numbers back into pictures. When the group was done, Mrs. J brought them back together. She asked them to look at the original images and then the digitized images.

"Make some observations about the products," she asked.

The observations ranged to differences in square size to some students had skipped lines and it looked just like the 'pixelated' TV screen. Some of the images were sharper than others, some were easy to identify what the original image was, some not so easy.

So, Mrs. J went back to the screen and the image of the school grounds. "Where are the pixels here?"

"They are in the image." responded Chelsea. "Zoom in all the way."

Mrs. J zoomed in to the point where the pixels were visible and the picture of the grounds was not to sharp anymore. "What could you do with the pixels in this image? Talk to people at your lab table." They visited for a  minute or so.

"If you know how big a pixel is, just like on the graph paper, you can use that to measure the size of stuff on the screen," said Stephano.

"That would be even better than using the football field," said Liza.

Mrs. J wrapped up the day with some other thoughts and questions about their animal images and that exercise. The class would use Google earth to try and quantify some of the questions about the school grounds, but then moved the images around to measure farmland and woods in the area and how much green space there is in town.

Doing river clean up and water monitoring of rivers close to your school can be set up through the DNR.

testing water in lakes will also allow students to test for invasive species that may have invaded the lake.

Fresh and Salt Curriculum Fresh and Salt is a collection of activities connecting Great Lakes and ocean science topics to enhance teacher capabilities for accessing science information in Great Lakes and ocean sciences. Designed to be used by teachers in grades 5-10, this exemplary collection provides teachers with an interdisciplinary approach to ensure students achieve optimum science understanding of both Great Lakes and Ocean Literacy Principles. A varied range of instructional modes is offered, including data interpretation; experimentation; simulation; interactive mapping; and investigation.

Herr, N. (2007). The sourcebook for teaching science. This page contains strategies to help teachers better attend to the needs of their ELL learners. These strategies are grouped according to the following learning tasks: listening, visualization, interpersonal communication, laboratory, demonstrations, reading and writing, instruction and vocabulary.

Posters will also allow ELL students to use pictures to help with the vocabulary necessary.

Activities like those in the vignette would help students

Technologies for Special Needs Students: In their newsletter, "Tech Trek",  from               the National Science Teachers Association, there are suggestions for using technology including voice recognition software

Technology that is used in the class room may be beyond parents knowledge.  Keep parents informed and students safe.