For example: A diver jumps from a 20 meter platform with an upward velocity of 3 meters per second. In finding the time at which the diver hits the surface of the water, the resulting quadratic equation has a positive and a negative solution. The negative solution should be discarded because of the context.

Assess the reasonableness of a solution in its given context and compare the solution to appropriate graphical or numerical estimates; interpret a solution in the original context.

Students need to be comfortable in using a graphing calculator or other graphing utilities to find solutions and describe characteristics of linear, quadratic and exponential functions. They should know how to use the table and graphing features to check solutions for these functions.

9.2.4.4
Represent relationships in various contexts using systems of linear inequalities; solve them graphically. Indicate which parts of the boundary are included in and excluded from the solution set using solid and dotted lines.

9.2.4.6
Represent relationships in various contexts using absolute value inequalities in two variables; solve them graphically.
Example: If a pipe is to be cut to a length of 5 meters, accurate to within a tenth of its diameter, the relationship between the length x of the pipe and its diameter y satisfies the inequality | x - 5| ≤ 0.1y.

9.2.4.7
Solve equations that contain radical expressions. Recognize that extraneous solutions may arise when using symbolic methods.
Example: The equation $\sqrt{x-9}=9\sqrt{x}$ may be solved by squaring both sides to obtain x - 9 = 81x, which has the solution x = - $\frac{9}{80}$.
However, this is not a solution of the original equation, so it is an extraneous solution that should be discarded. The original equation has no solution in this case.
Another example: Solve $\sqrt[3]{-x+1}=-5$.
9.2.4.8
Assess the reasonableness of a solution in its given context and compare the solution to appropriate graphical or numerical estimates; interpret a solution in the original context.

9.2.4.8
Assess the reasonableness of a solution in its given context and compare the solution to appropriate graphical or numerical estimates; interpret a solution in the original context.

Both of these methods will provide students with approximate solutions;

Use mathematical models to represent and understand quantitative relationships:

Approximate and interpret rates of change from graphical and numerical data.

§  A-SSE.3.a. Factor a quadratic expression to reveal the zeros of the function it defines.

§  A-SSE.3.b. Complete the square in a quadratic expression to reveal the maximum or minimum value of the function it defines.

§  A-SSE.3.c. Use the properties of exponents to transform expressions for exponential functions. For example, the expression 1.15t can be rewritten as (1.151/12)12t ≈ 1.01212t to reveal the approximate equivalent monthly interest rate if the annual rate is 15%.

o   A-SSE.4. Derive the formula for the sum of a finite geometric series (when the common ratio is not 1), and use the formula to solve problems. For example, calculate mortgage payments.

o   A-CED.2. Create equations in two or more variables to represent relationships between quantities; graph equations on coordinate axes with labels and scales.

·         A-REI (Reasoning with Equations and Inequalities) Understand solving equations as a process of reasoning and explain the reasoning.

o   A-REI.1. Explain each step in solving a simple equation as following from the equality of numbers asserted at the previous step, starting from the assumption that the original equation has a solution. Construct a viable argument to justify a solution method.

o   A-REI.2. Solve simple rational and radical equations in one variable, and give examples showing how extraneous solutions may arise.

o   A-REI.3. Solve linear equations and inequalities in one variable, including equations with coefficients represented by letters.

§  A-REI.4.a. Use the method of completing the square to transform any quadratic equation in x into an equation of the form (x - p)2 = q that has the same solutions. Derive the quadratic formula from this form.

Students need to make sense of problems involving quadratic functions. In the vignette below, the problem involves drug testing which is very common in athletics and is an increasing trend in many occupations. Students need to identify the variables involved in the situation and think about how the dependent variable is changing with the independent variable. Once they identify the variables, they begin to build a model. Area models are often useful with quadratic models. You will notice that the students struggle with the interpretation of the solution. The teacher needs to make sure to discuss how the solution relates to the original situation.

The students are asked to read the following problem and write down a sentence with a blank that answers the question.

There are over 100,000 drug tests given to athletes at a cost of over $30 million. In order to save money, some teams are trying to devise ways to cut the number of tests given to the student athletes but still test everyone. The University of Minnesota decided to combine the samples of two athletes together and run the test on the pooled sample. Will this strategy reduce the number of tests the University gives to its student athletes?

Teacher: So you would put "yes" in the blank in your sentence.

Noam: Yes, no, I mean I would put "reduce in half" because it would cut the number of tests in half.

Matt: I am not sure that would work. What happens if the pooled sample came back positive? Then they would have to test again because they would not know who was positive.

Nick: You agree with everyone. If a [pooled] sample came back positive, then you would have to test each person individually, so you would actually test three times for two people. This plan stinks!

Michele: I do not agree with you, Nick. If a sample comes back positive, then you may only have to test one of the two people. If that test comes back negative, then you know the next person is positive and do not have to do another test.

Nick: That is still two or three tests per sample of two. I still say you should do individual tests and it will be less complicated and it still costs the same.

Teacher: There are three possibilities for the number of tests for a sample of two people. There could be one test, two tests, or three tests as long as we keep track of whom we test second. So should we pool the samples?

Noam: It all depends on how many people would test positive. If nobody uses drugs, then the total number of tests you would have to run would be half. If all people used the drug, then we would have to run three tests for each pair and that would cost more than testing individually.

Teacher: The percent of people using a drug does influence the number of tests the university would have to do. What percents would it make sense to pool groups of two students together and when would it not? Please work in your groups to find a solution to this problem.

After 15 minutes, students presented their thinking.

Matt: I decided to find the number of tests required, given the percent of people who would test positive. I used a rectangle to represent the two people.

But we do not know what to do with this.

Michele: We wanted to find when the average number of tests would be equal to two. We only have to solve the equation:

Nick: What does that mean?

Matt: The value of p has to be between zero and one because p is a percent of people. So does this mean we will save money if 38% of the people are known to use the drug?

Samantha: No at 38-percent the average number of people who test positive is two and it would not matter if they pooled the tests or just tested each person individually.

Jesse: I just made a graph and it shows that the average number of tests is less than two when the percent of people who test positive is less than 0.38.

So we think that the University of Minnesota will save money if the percent of people who they think take the drug is less than 38%. Otherwise, they should test the students individually.

The graphing method provides students with an opportunity to see where the equations are equivalent and what action caused the equations to be non-equivalent.

The step that caused the mistake is step 3 where the division by 2x occurred. This mistake and the graph provides teachers with an opportunity to discuss the idea of the limitations of the division property of equality and the reason that the solution  x = 0 was lost was due to division by zero. Matching the steps the students use with the equation with the resulting actions on the graphs provides a way to help students make sense of the concept of equivalent equations. 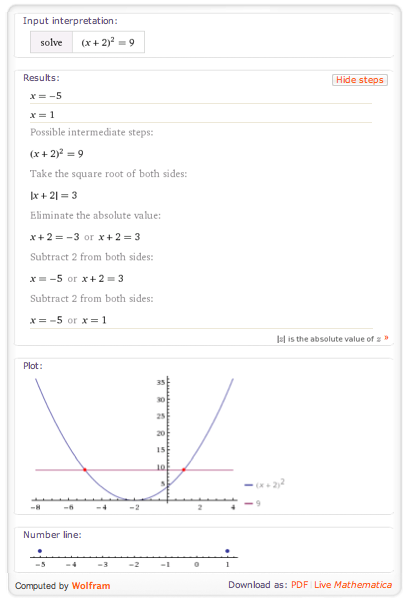 The student who made the mistake described above and the teacher can look at the steps the program used and compare the steps with what the student did. The teacher can have a richer discussion with the class about the types of functions that can be applied to both sides of an equation and still maintain equivalent equations. This approach can provide more meaning than simply reminding the student to always remember to put a ± in front of the radical when you take the square root of both sides of an equation.

John and Betty's Journey into Complex Numbers
This is a children's book-on-the-web from Australia, designed to introduce complex numbers in story form in a way that is intuitive and enjoyable for students. John, Betty and their dog Trevor solve a series of problems designed to introduce integers, fractions, surds, imaginary numbers, complex numbers, Argand diagram; vectors, multiplication in polar form, relating polar and Cartesian form, De Moivre's theorem; and the Mandelbrot set.

Kennedy, P., and St. John, D. (2006). Chapter 2, Complex Numbers and Matrices. In Navigating through Number and Operations in Grades 9-12. Reston, VA: National Council of Teachers of Mathematics.
This chapter provides activities to enable students to demonstrate fluency with addition and multiplication of complex numbers, understand different representations of complex numbers, and to determine the properties of the complex number system and to compare them with other number systems.

Algebra 2: Complex Numbers
Students look for patterns to determine how the calculator adds, subtracts, multiplies and divides complex numbers. In each problem, students examine completed examples and discuss a process with a partner, then complete additional problems to confirm or refine the process. 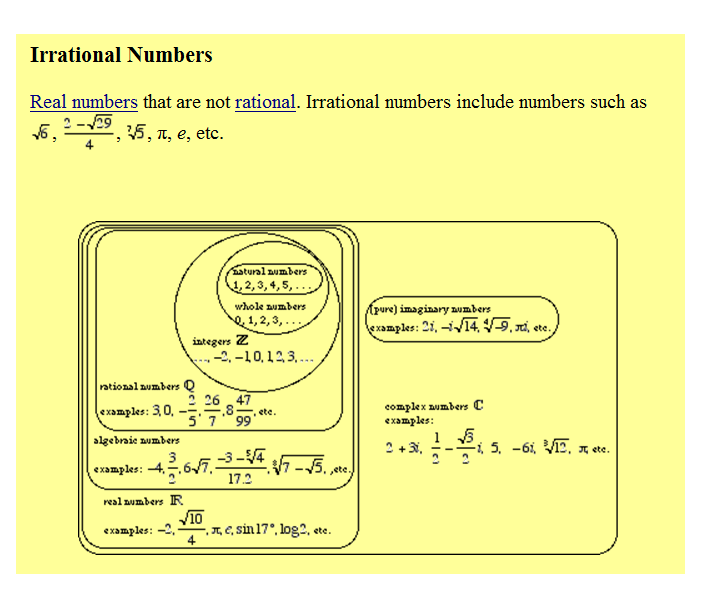 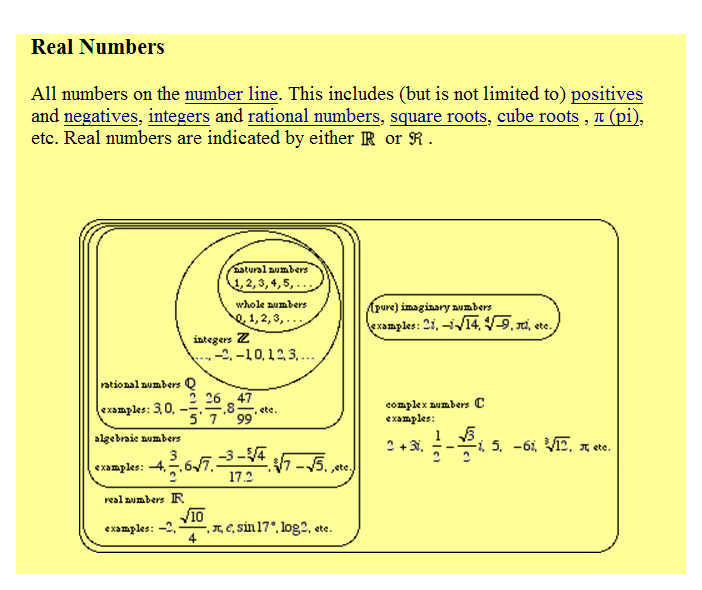 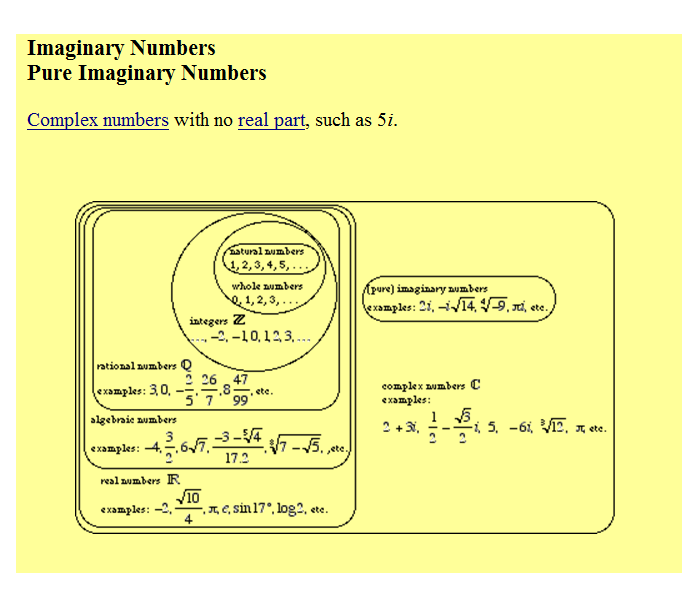 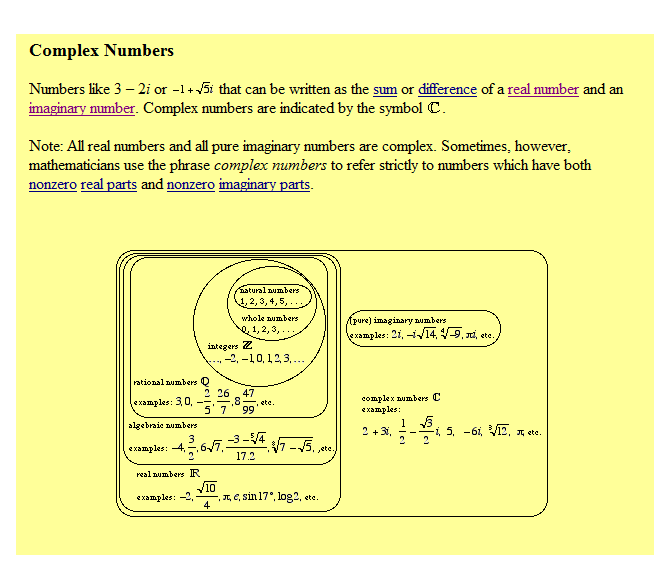 roots of a function: 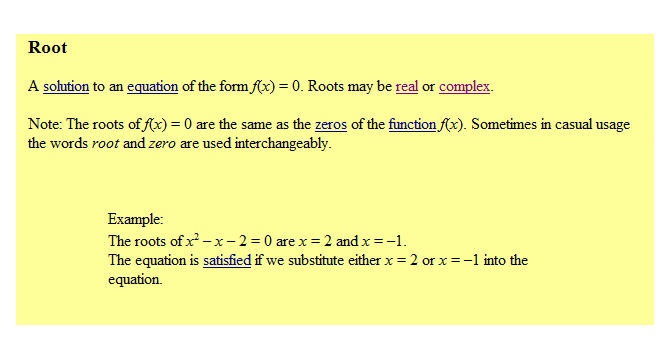 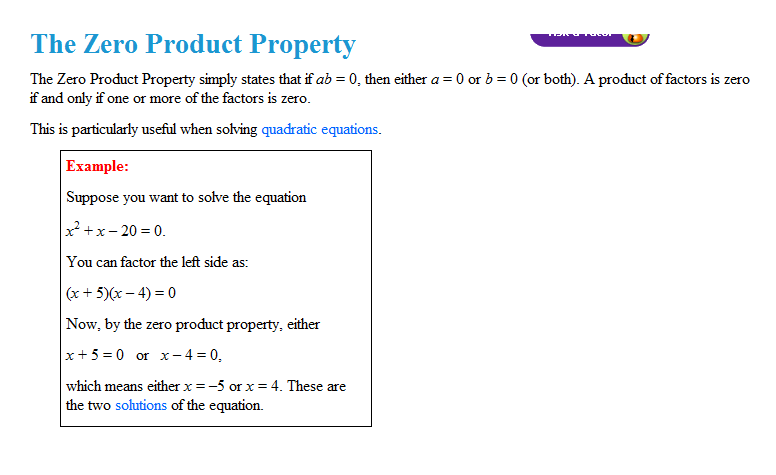 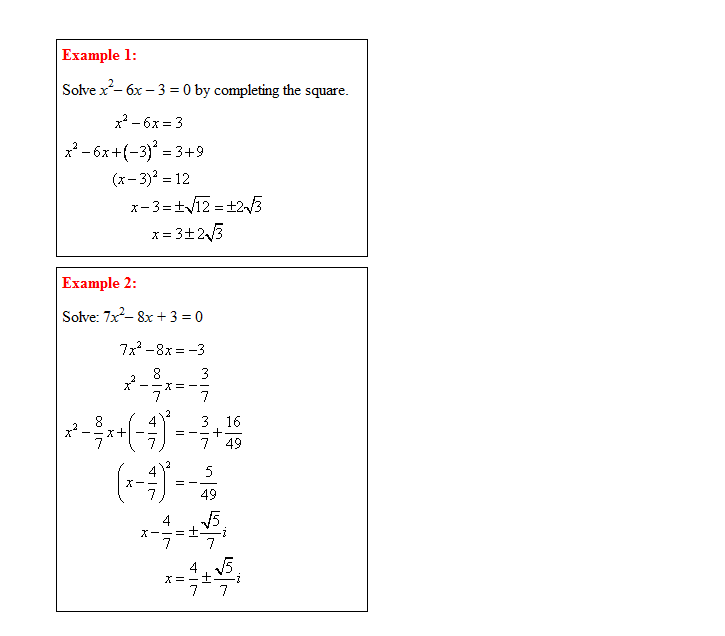 Completing the Square from www.hotmath.com ) 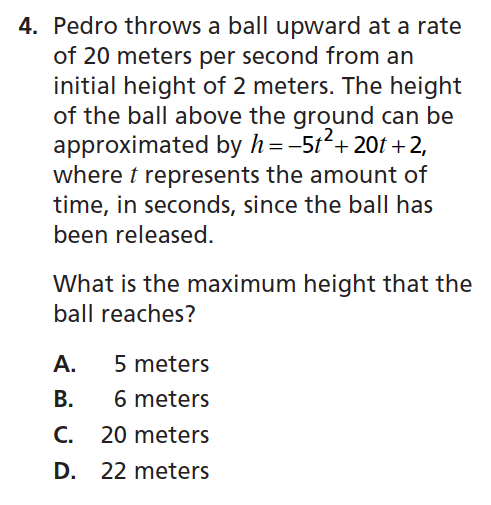 2. Select the equation that has two complex solutions.

5. A car costs $20,000. It decreases in value at the rate of 20 percent each year, based on the value at the beginning of that year. At the end of how many years will the value of the car first be less than half the cost?

DOK Level: 3 / Cognitive Level: Hard (30.65% correct)
Answer: 4 years with correct work shown or explanation given. An answer of 3.1063 (or some rounded value of that to the nearest tenth or smaller) with correct work is acceptable. The correct work could show a sequence of correct computations and/or the results of those computations. For example, since a calculator is available for this question, the student may just show the amounts $16,000; $12,800; $10,240; and $8,192 at the ends of the first 4 years, respectively.
Source: NAEP Grade 12, 2005, Question M12- 12
(http://nces.ed.gov/nationsreportcard/itmrlsx/detail.aspx?subject=mathematics)

This guide helps all students to become better readers of their textbooks and learn to anticipate the content they will be reading.