This vignette uses a multiplication problem - figuring out the weight of all of the insects in the world - to learn about multiplying exponents.

Teacher: Today I have a question for you. What is the total weight of the world's insect population?

Student: How are we supposed to know?

Teacher: What information would you need to know to figure it out? What questions would you ask?

Student: Well...How many insects are in the world?

Student: What is the weight per insect?

Student: What is the birth rate and death rate?

Student: Yeah, because I kill bugs all the time.

Teacher: In his book, Six-Legged Science, Brian Hocking estimates that there are

Student: We still need to know the weight per insect. Then we can just multiply the total insects by the average weight.

Teacher: Any guesses on the average weight?

Student: Well, it has to be really light. Way less than a pound. Maybe even less than a gram.

Teacher: To simplify things for right now, I am going to tell you that the average weight for an insect is about 2.5 × 10-3grams.

Student: What does the negative 3 as an exponent mean?

Student: An insect is really small. It weighs a lot less than a gram. So doesn't the negative exponent tell us to move the decimal point to the right instead of the left?

Student: Well, since the base number is ten, aren't we just repeated multiplying by 10? When we multiply by 10, we move place value, and decimal points help us hold place value.

Teacher: If the positive exponent makes the coefficient get bigger by multiplying by 10, what do you predict the negative exponents do?

Student: We know it has to represent a smaller number and if it moves the decimal to make it smaller, I think the negative would tell us to divide by 10.

Teacher: Why can you do that? What are you really doing?

Student: Oh, she's dividing by 10 three times. So she gets 25 ten thousandths.

Teacher: How could you show that process without just moving the decimal?

Teacher: OK, so now we have what we need. You all told me earlier we could multiply the total insects by their average weight to find the weight of the total insect population. How do you multiply when the number is written in scientific notation?

Student: It's a big number but can't you just type it in your calculator? I get 2.5E15.

Teacher: What does that mean?

Student: Hey, I see something. It's all multiplication. So I could write it like this:

Teacher: Let's look at this first one. How many times are we multiplying by ten?

Student: So if you put those together we get this?

Student: I don't want to write this out like this every time I do scientific notation.

Teacher: We are writing it out so we can see if there is a pattern that might help us find a rule that always works. Let's finish this one and then we will look at some more to see if we can find a way to make this easier.

So, if we simplify this in expanded form, how many times are we left multiplying by 10?

Student: Hey, when I got 2.5E15. That must be the calculator's version of scientific notation. The coefficient is the number before the E and the number after the E is the exponent or how many times I multiply by 10. Cool!

Student: So the approximate total weight of all the insects would be 2.5 × 1015 grams.

Student: How heavy is that? How many grams are in a pound?

Teacher: That will be your homework tonight. Figure out how many pounds the insects weigh and then relate that to something that weighs a similar amount or a group of something that would weigh that amount.

Teacher: OK, so let's go back to those rules. How do we operate with exponents? Let's start with multiplication. 106 × 103. How would you write each number in expanded form?

How could you write this whole thing in a simpler way?

Teacher: Let's do one more and see if there is a pattern. Let's use a base number of 3 this time. 38 × 34. Write it out in expanded form and then simplify.

Teacher: Let's look at all three examples. Do you notice any patterns?

Student: Hey, it looks like you can just add the exponents if the base numbers are the same. It even works for the negative exponent. That makes sense because it's really all multiplication, and you just need the total number of times you multiply.

Student: So if you multiply in exponential form, we can simplify by keeping the base the same and adding the exponents. That would work when we are multiplying in scientific notation then too. Then I wouldn't have to write out all those numbers.

Student: What if we were dividing instead of multiplying?

Teacher: We kind of already did that when we were working with our insect problem. Because of the exponent of -3, it was very similar to dividing. Look back at that example.

Student: Since ten divided by ten is one, it's kind of like we lose those tens in the denominator. You keep dividing and then whatever you have left over is the simplified answer.

Student: I did it this way.

Once you get an answer, look back at the others and come up with a rule that will work any time we divide numbers in exponential form.

Teacher: Here are our three examples. What do you notice?

Student: I notice that the bases have to be the same just like with multiplication.

Student: That makes sense, because as we divide out the base numbers it's like we lose one more that we multiply by. We are kind of crossing them out instead of adding them up like we did in multiplication.

Student: OK, just so I know I have this. If we divide in exponential form, if the bases are the same we can subtract the exponents to simplify number?

Teacher: You got it! What happens if you forget these rules?

Student: Well, if you just write it out in expanded form, you'll get the same answer. That will help me remember if I get stuck.

Teacher: In your notebooks, make two sections. One for multiplication and one for division. In each section, make up your own example, show it written out in expanded form and write a sentence explaining the rule.

Understanding large numbers
This website helps students visualize large quantities, such as a million, billion and trillion, by showing illustrations of huge stacks of pennies.

2.  Mr. Loya stated that the circumference of Earth at the equator is 24,902.4 miles.  Which expression represents this number in scientific notation?

3.  Which expression is equivalent to x6x2? 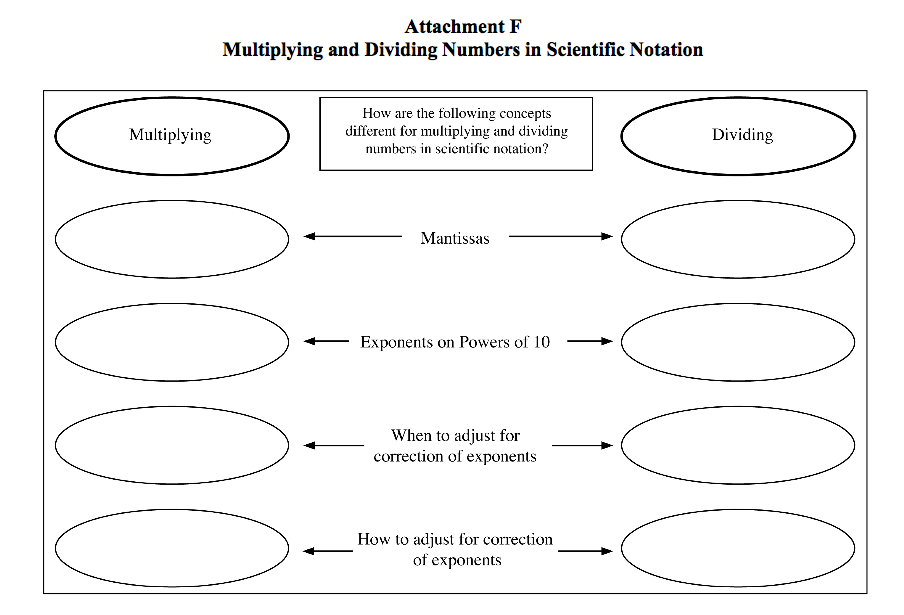