For example: Put the following numbers in order from smallest to largest:

Number Systems: Know that there are numbers that are not rational, and approximate them by rational numbers.

Expressions and Equations: Work with Radicals and Integer Exponents.

This number line activity gives students the chance to work with rational and irrational numbers.

What do you notice about all the missing sides?

Student: They are all square roots.

Teacher: So what is the actual length of each missing side?

Teacher: Is that an exact value?

Student: Well, no, but it's close enough. Isn't it?

Teacher: Yes, pi is probably the most famous irrational number you are familiar with. So what makes pi special?

Student: It goes on and on forever without a repeating decimal pattern.

Student: But that's a pattern.

Teacher: Is it a repeating pattern?

Teacher: OK. Let's look at these. Are all of these irrational?

Student: Group 2 doesn't have dots after so doesn't that mean the number ends and that it would not go on forever? So it's not irrational. We could write it as a fraction. It would be a really hard fraction to read but we could do it.

Teacher: So those dots do represent a number that goes on forever. If Group 2 put dots after it, would it be irrational?

Student: I guess. There is no repeating pattern yet so I think it would be good.

Student: I think Group 3's number is not irrational either. It has the dots but it started repeating; after 21, it went back to 232425 and so on.

Teacher: What about Group 1 and 4?

Student: Well, they both have patterns, but it's not a repeating pattern so I guess they would be irrational.

Teacher: So what is everything else?

Student: Decimals that end or have a repeating pattern.

Teacher: I think you covered it. Let's see practice and sort this list of numbers. Split them into two categories: Rational and Irrational. 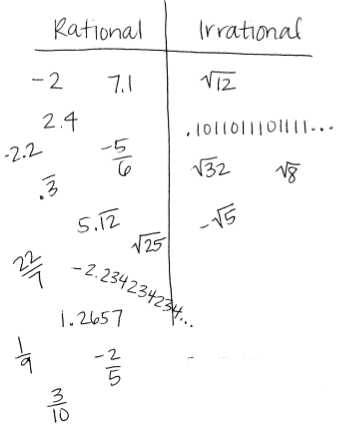 Teacher: How do your lists compare? Did you all agree?

Teacher: Now I have another task for you. You all need to be able to order numbers. Let's start with the rational list. I will give each group a card with one of the rational numbers from the list. You need to send one person up to the number line and clothes pin your number in the correct place on the line. Notice the number line already has -3, -2, -1, 0, 1, 2, 3, 4, 5, 6 labeled. Any questions?

Teacher: When you get your number, without using a calculator, agree as a group as to where it goes on the line.

Students place numbers on number line. Students do this relatively quickly and correctly.

Student: That was easy. We know how to order numbers.

Teacher: How did you figure out where the fractions went? I heard many groups wanting to use their calculator to find the decimal equivalent.

Teacher: So you had a strategy that worked when you couldn't find the decimal value. I'm glad to see that you were using some estimations to figure out approximately where to place the number. Remember these strategies because they will help your group as you place the irrational numbers on the number line.

Next, you will place the list of irrational numbers on the number line. Again each group will get a card and you will need to find the location of each irrational number without using the square root key on your calculator. Any questions?

Student: I can place the irrational numbers that are already in decimal form, but our group got $\sqrt{12}$. We have no idea the value of the decimal approximation.

Teacher: Let's do this one together. What do you know?

Student: It needs to be a number that when multiplied by itself is 12.

Teacher: That's a start. What are some possibilities?

Student: Cool. That's kind of how we were figuring out the fractions. But now what? Where are we going to place it between 3 and 4?

Teacher: Let's try and compare all the numbers in square root form.

Teacher: What would your rational approximation be for the $\sqrt{12}$?

Student: I would say 3.4 because it's almost in the middle but a little closer to 3.

Teacher: How could you check to see if your approximation is close?

Teacher: Will we ever get exact?

Student: No, because it's an irrational number. The decimal place will go on forever.

Teacher: It's kind of like what you were doing with your fractions earlier. Depending on how accurate you need to be, you could just find how it compares to another number. It might be OK to know that it's almost halfway between 3 and 4 but a little bit close to 3. You might need to go further if you are comparing it to a number that is close to that value.

Teacher: Let's try another one before I send you off to locate your irrational number on the number line. Let's try $\sqrt{8}$. What do we know?

Student: Something times itself has to equal 8.

Teacher: This is an important connection. If you can identify the two integers your square root is between you are making progress. Keep using those perfect squares as benchmarks. Where do we go from here?

Teacher: How do we do that?

Teacher: Could we make a better guess?

Teacher: Your turn to do it on your own. Figure out your rational approximation and locate it on the number line.

This website offers directions for an activity that involves putting rational and irrational numbers in order on a number line.

Negatives on an everyday number line

This article that introduces a number line activity using benchmarks in students' own lives. It pushes them to think about the meaning of negative values and fractions and their placement on the number line. (Must be an NCTM member to view)

irrational number: a number which cannot be written as a fraction where the numerator and denominator are both integers and where the denominator does not equal zero; a non-repeating and non-terminating decimal number.

square root: a divisor of a quantity that when squared gives the quantity. 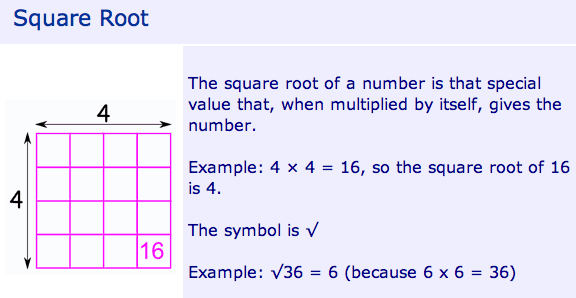 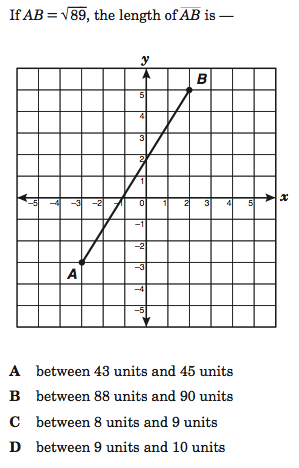 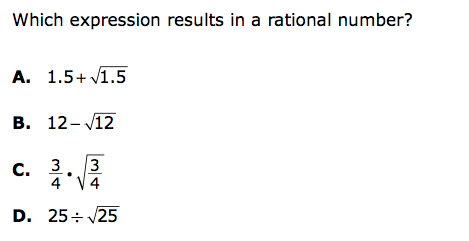 5. Which irrational number is the greatest?

Taken from this source

Example:
Find the two integers that $\sqrt{130}$ is between.

Find the perfect squares closest to 130.

Information about rational and irrational numbers