Explain how the fossil record documents the appearance, diversification and extinction of many life forms.

Use internal and external anatomical structures to compare and infer relationships between living organisms as well as those in the fossil record.

Recognize that variation exists in every population and describe how a variation can help or hinder an organism's ability to survive.

Recognize that extinction is a common event and it can occur when the environment changes and a population's ability to adapt is insufficient to allow its survival.

The environmental conditions influence which organisms will survive and pass on their genes.

The success of an organism, in a changing environment, is affected by the inheritance of characteristics that may give a reproductive advantage.  Extinctions have occurred throughout the history of life and continue to occur. Most species living today did not exist when life first began on Earth. Fossils can be used to study the anatomical features of extinct species.Scientists have found similarities and differences between existing and extinct species which infer biological relationships. 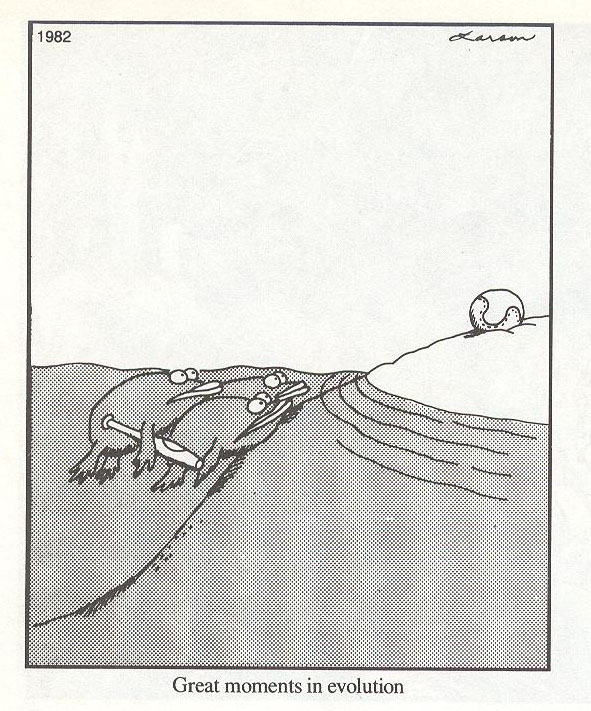 During middle school, several lines of evidence are further developed. The fossil evidence can be expanded beyond extinctions and survivals to the notion of evolutionary history. Sedimentation of rock can be brought in to show relative age. However, actual age, which requires an understanding of isotopic dating techniques, should wait until high school, when students learn about the structure of atoms. Breeding experiments can illustrate the heritability of traits and the effects of selection. It was familiarity with selective breeding that stimulated Darwin's thinking that differences between successive generations can naturally accumulate.

8. The Designed World A Agriculture

Fossils are mineral  replacements, preserved remains,  or traces of organisms  that lived in the past. Thousands of layers of sedimentary  rock not only provide  evidence of the history  of Earth  itself but also of changes in organisms whose fossil remains  have been found in those layers. The collection of fossils and their placement  in chronological order (e.g., through the location  of the sedimentary layers in which they are found or through radioactive dating) is known as the fossil record.  It documents the existence, diversity, extinction, and change of many life forms throughout the history  of life on Earth. Because of the conditions necessary for their preservation,  not all types of organisms  that existed in the past have left fossils that can be retrieved. Anatomical similarities and differences between various organisms  living today  and between them and organisms  in the fossil record enable the reconstruction of evolutionary history  and the inference of lines of evolutionary descent. Comparison of the embryological  development of different species also reveals similarities that show relationships not evident in the fully formed anatomy.  8LS4.A

Genetic variations among  individuals  in a population give some individuals  an advantage in surviving and reproducing in their environment. This is known  as natural selection. It leads to the predominance of certain  traits in a population and the suppression of others.  In artificial selection, humans  have the capacity  to influence certain  characteristics of organisms  by selective breeding. One can choose desired parental traits  determined by genes, which are then passed on to offspring.  8LS4.B

Ms. H pointed to projection screen. "What do you recognize in this image?"

Ms. H calmed the excitement down, "You are all correct. But what organism's arm and hand does this show?"

"It's mine," answered Davey. "Last year when I broke my arm skateboarding, that is what it looked like. The doctor showed me, the bones and all! Except this hand does not have any broken bones in it."

"You're correct Davey. This is not your hand, though. It is the hand of a chimpanzee."

Sal broke in, "Maybe you're a chimpanzee!"

"Enough, enough. Davey is no chimpanzee."

"Thanks, Ms H," he sighed with relief.

"No, Davey you are no chimpanzee, but what do you have in common with one?"

"The bones in my hand sure looked like those. 'Cept for the broken parts.

This lesson  would be part of  a series of lessons where student get to analyze the data providing evidence for evolution. The comparison of homologous structures in various animals is an easy thing to see and do. If you have skeletons of mammals, birds, reptiles and amphibians available, those provide excellent models. This is a technology based model: it uses xrays of various animals and some easy to use open source software (ImageJ) to manipulate digital images of the forelimbs. The activity calls upon students to differentiate and identify species, but also compare similarities and differences of homology and function.

Each student is directed to a computer station. The handout directs them to open up the images. The students have access to the controls of the software to change the contrast, brightness, colors and a range of tools. The various tools allow structures to stand out, whether they are bone or soft tissue.

The students work through a variety of animals, some familiar (human, other primates) looking and some not so easily identified (lions, bears, owls, whales....).

As they gather data from their observations, they collect it on a table.

Ms. H asks students to pause for a second and step away from the monitor. "What are the differences in some of the bones that you can see?"

"They all have the same shape and pattern, at least the five that we've looked at so far,"added James.

"Remember, part of your task is to not only compare structures, but also try and figure out the organism from the list. Then take it a step further to identify the function of the 'animal hand'", said Ms. H.

As the students work through the images and collect data while manipulating the images, information piles up. They find that structures are similar, but the functions may not be. If students have had some training in classifcations and cladistics, a simple cladogram can be created showing the common ancestory. This activity can also be tied to the evolution of whales, where there is lots of fossil evidence showing intermediates along an evolutionary trail. The PBS series "Evolution" has a few minutes of whale evolution that could be used as an extention of this activity along with relating it to current organisms and evolutionary origins. These homologous structures have an evolutionary common ancestory. This activity could be tied together with some biomolecular evidence that shows the number of similar amino acids between these organisms. G/T students would be able to go beyond the visible structural similarities and differences to the level of how are the proteins show relationships From the amino acid similarities, a cladogram could be constructed, showing the evolutionary relationships.

Students need to be actively engaged in examining the nature of science and the various evidence that supports evolutionary biology. Educators have access to many primary sources of data that students can examine: whether they are fossils, model hominid skulls or molecular comparisons.

Understanding Evolution This site is jam-packed with information, background and activities for science teachers. From the University of California's Museum of Paleontology

Evolution and the Nature of Science Institutes The main objective of ENSI is to improve the teaching of evolution in science courses by encouraging teachers to teach evolutionary thinking in the context of a more complete understanding of modern scientific thinking. This resource is loaded with student engaging activities that address the nature of science through direct experiencs.

Virus and the Whale: Exploring Evolution in Creatures Small and Large Judy Diamond, Editor with Carl Zimmer, E. Margaret Evens, Linda Allison, and Sarah Disbrow What middle schooler could resist an invitation to follow seven scientists to their labs and into the field, going inside the body to meet a virus, underground to meet leaf-cutter ants, to the deserts of Pakistan to say hello to skeletons of ancient whales ... and more. NSTA Press Arlington, VA 2006 ISBN: 9780873552639

The Magic Hooey Stick Science deals only with natural patterns and mechanisms. Understanding science enables one to differentiate it from pseudoscience, superstition, and non science. This activity addresses the difference between science and non-science, a great way to start the concept of evolution.

Minnesota Citizens for Science Education This organization is working to assure the teaching and learning of evolutionary biology and other sciences in Minnesota's K-12 public school classrooms. The organization has many resources for Minnesota science educators.

Internet connections if possible. Being connected to the web offers a link to places all across the planet. Students may be able to view a fossil dig in real time, converse with scientists via Skype or Facetime, connect with classes in other parts of Minnesota, the United States or the world.

Computers with access to images and image processing software (ImageJ for example). The image bases of the web hold incredible promise to add evidence that support and explain the process of evolution.

Cameras in the classroom and on phones allow students to present data to one another in creative and real time ways.

Math skills are used in determining the years on time lines.

Which of the following have scientists found when they have compared and contrasted an existing species?

2.    They have found similarities, but they have not found differences.

3.    They have found differences, but they have not found similarities.

4.    There is no way to compare extinct and existing species.

What is TRUE about environmental conditions on earth?

1.    Environmental conditions on earth have always been the same, except for minor changes from year to year.

2.    Environmental conditions on earth changed in the past, but they are not changing now.

3.    Environmental conditions on earth stayed the same in the past, but they are changing now.

4.    Environmental conditions on earth changed in the past, and they are changing now.

Fossils can be used for which of the following?

A picture time line may be at some at risk student's ability.

Cogito is another website that is available for G/T Students.

Activities like those in the vignette would help students.