Reproduction is a characteristic of all organisms and is essential for the continuation of a species. Hereditary information is contained in genes which are inherited through asexual or sexual reproduction.
Grade:
7
Subject: Science
Strand: Life Science
Substrand: Evolution in Living Systems
Benchmark: 7.4.3.1.1 Genes & Inheritance

Recognize that cells contain genes and that each gene carries a single unit of information that either alone, or with other genes, determines the inherited traits of an organism.

Distinguish between characteristics of organisms that are inherited and those acquired through environmental influences.

All organisms need to reproduce, to pass on hereditary information and to ensure the continuation of life.

Mechanisms of inheritance whether asexual or sexual, are essential for continuation of the species. Cells contain genes that are passed on to the next generation.  In asexual reproduction all genes come from one parent. Asexually reproducing organisms variation is based on the mutations that will occur within an individual organism's genome. In sexual reproduction half of the genes come from each parent. This recombination and mixing of genes creates variation within a population, in addition to the mutation rates of individual organisms.

Organisms within a population vary genetically. The variations within any population are subject to pressure from nature to survive. Nature selects which varieties survive to reproduce and pass their genes on to the next generation. 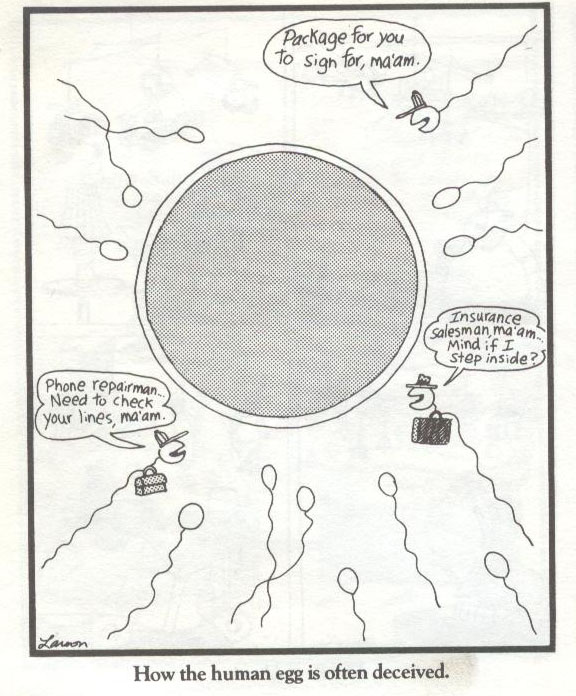 5. The Living Environment B

Now is the time to begin the study of genetic traits-what offspring get from parents. This topic can be handled as a natural part of the study of human reproduction. Students should examine examples of lineages for which breeding has been used to emphasize or suppress certain features of organisms.

Genes are located in the chromosomes of cells, with each chromosome pair containing two variants of each of many distinct genes. Each distinct gene chiefly controls the production of a specific protein, which in turn affects the traits of the individual  (e.g., human skin color results from the actions of proteins that control the production of the pigment melanin).  Changes (mutations) to genes can result in changes to proteins,  which can affect the structures and functions of the organism and thereby change traits.

In sexually reproducing organisms, each parent contributes half of the genes acquired (at random) by the offspring.  Individuals have two of each chromosome and hence two alleles of each gene, one acquired from each parent. These versions may be identical or may differ from each other.

In addition to variations that arise from sexual reproduction, genetic information can be altered because of mutations. Though rare, mutations may result in changes to the structure and function of proteins.  Some changes are beneficial, others harmful,  and some neutral  to the organism. 8LS3.B

Organisms reproduce, either sexually or asexually, and transfer their genetic information to their offspring.  Animals engage in characteristic behaviors that increase the odds of reproduction. Plants reproduce in a variety of ways, sometimes  depending  on animal behavior and specialized features  (such as attractively colored  flowers) for reproduction. Plant growth can continue throughout the plant’s life through production of plant matte  in photosynthesis. Genetic factors as well as local conditions affect the size of the adult  plant.  The growth of an animal  is controlled by genetic factors, food intake, and interactions with other organisms, and each species has a typical adult  size range. 8LS1.B

The Flight of the Bumblebee by Nikolai Rimsky-Korsakov was playing as students walked into the classroom of Mr. R. In a flash, the students were in their seats, they knew what that music meant today.

It was the 1st pollination day of the FastPlants. The students had started the plants from seed a little over two weeks ago. In that time, the plants had germinated from the seeds, and grown to a height of a few inches. Flowers had appeared and were now ready for pollination.

FastPlants are easy to grow and have a number of identifiable mutants. Students had grown the standard (wild type) plant and were going to cross pollinate with the tall mutant. The tall plants produce an overabundance of gibberillin, causing them to be taller than the wild type.

Easy to see and easy to grow.

The day before, students had glued freeze dried bee thoraxes to the end of toothpicks. Today, they would collect pollen from one variety of flower and pollinate another in a simple Mendelian cross. Previous to this portion of the lab, students had studied flower anatomy to identify the male and female reproductive portions of the plants. A local flower shop was nice enough to donate dated flowers for the students to dissect. They had also collected pollen and observed a microscope the pollen itself germinate and the tubes grow in a sugar solution.

The pollination from one variety to another continued for several days in a row. Soon, the students could see changes in the flowers. Seed pods started to develop and over the next weeks the plants continued to grow.

Eventually, the seed pods are mature and the FastPlants die. Students gather the the seed pods, then harvest the seeds.

These seeds are the F1 generation and can be planted. Students make observations of the FastPlants. Are the plants tall or short? Are they the same as the parent plants?

Students self pollinate this generation of flowers using different bees. Students then develop and mature. The seed pods are collected again and these seeds are planted.

Students make observations of this F2 generation of plants. The number of tall and normal heighted plants are counted and placed in a data table. The parent height trait is seen again and students are able to create a Punnett Square based on the data they collect. Mendelian ratios can be studied across these generations in this model of simple inheritance.

Once the plants are up and growing, the maintenance is simple.

Students get to plant and grow several generations of plants. Making observations, drawing diagrams of the plants as they grow, pollinating the plants (cross/self pollination) is a new experience for students. The FastPlants investigation is a high interest, extended lesson and models the skills and practice of good science: careful record-keeping, inferring from evidence, quantifying data, persistence, care with procedures and planning.

7.4.3.1.1 Cells Alive  This site is full of animations and background information about cells.

Inside a Cell This site from the University of Utah has information, animations and resources for teachers and students.

Internet access with projector or individual computers/I-pads for students

Plants can be cloned artificially using cuttings or tissue culture. Animals can be cloned using embryo transplants or fusion cell cloning. Genetic information from one species can be transferred to another species using genetic engineering.

Students should be encouraged to explore how various organisms satisfy their needs in the environments in which they are typically found. They can examine the survival needs of different organisms and consider how the conditions in particular habitats can limit what kinds of living things can survive. Studies of interactions among organisms within an environment should start with relationships that students can directly observe. Students should look for ways in which organisms in one habitat differ from those in another and consider how some of those differences are helpful to survival. The focus should be on different features of organisms and how these features impact the organism's chances for survival and reproduction.

Wisconsin Fast Plants Activity and Resource Library Wisconsin Fast Plant resources are made available openly through the University of Wisconsin, Madison. Content created on this site is licensed under a Creative Commons Attribution NonCommercial-ShareAlike 3.0 License.

English and Math will come into play with cell models.

Fully-grown adults are much larger in size than young children.  What happens to the cells of the body during the growth of a child?

2.    The cells of a growing child divide to make more cells, and those cells grow to become the same size as the cells were just before they divided.

3.    The cells of the body of a growing child grow, but the number of cells stays the same.

4.    The size and number of cells in the body of a growing child stay the same.

What is TRUE about cells?

1.    All living things are made up of more than one cell, and all cells are the same size and shape.

2.    All living things are made up of more than one cell, but not all cells are the same size and shape.

4.    Not all living things are made up of more than one cell, and not all cells are the same size and shape.

Questions could be used as self-reflection or in professional development sessions.

Misconceptions about the history of life and how it came about are unfortunately very common. Most of these misunderstandings have to do with assumptions that evolution proceeds in a particular direction or that individual living things can choose to adapt. The following site can be very helpful University of California Museum of Paleontology

If observing a lesson on this standard what might they expect to see.

Herr, N. (2007). The sourcebook for teaching science. This page contains strategies to help teachers better attend to the needs of their ELL learners. These strategies are grouped according to the following learning tasks: listening, visualization,       interpersonal communication, laboratory, demonstrations, reading and writing, instruction and vocabulary.

Labeling the cell in two languages will help these students.

Being the "Bee" will help students grasp concepts

All the hands on projects listed above will help students

Cogito is another website that is available for G/T Students

This site hosts a English to Ojibwe and Ojibwe to English dictionary that may be used to look up meanings to vocabulary words.

Science education should include the use of culturally relevant content (Ferguson, Robert. "If Multicultural Science Education Standards' Existed, What Would They Look Like?." Journal of Science Teacher Education. 19.6 (2008): 547-564. Print.) The value of using such approaches is that they can improve the conversation about beliefs in science and hone beliefs about science for all students.

All the hand on projects listed above will help students

Learning experiences should be as multi-sensory as possible and safe.  Such experiences have an added benefit too.  They are effective with all learners.

Parents may hear about how students became a "Bee" for a day.