The flow of energy and the recycling of matter are essential to a stable ecosystem.
Grade:
7
Subject: Science
Strand: Life Science
Substrand: Interdependence within the Earth System
Benchmark: 7.4.2.2.1 Photosynthesis

Recognize that producers use the energy from sunlight to make sugars from carbon dioxide and water through a process called photosynthesis. This food can be used immediately, stored for later use, or used by other organisms.

Describe the roles and relationships among producers, consumers and decomposers in changing energy from one form to another in a food web within an ecosystem.

Explain that the total amount of matter in an ecosystem remains the same as it is transferred between organisms and their physical environment, even though its form and location change.

For example: Construct a food web to trace the flow of matter in an ecosystem.

Material and energy move through nature to create a stable environment.

The flow of energy starts with producers and is distributed through food webs. Plants capture light energy from the sun and through the process of photosynthesis, convert it into chemical (bond) energy. This starts the flow of energy through all biological organisms. Producers, as the entry point for this energy, create complex relationships, allowing the trapped energy to flow from organism to organism, from trophic level to trophic level. Following the flow of energy and bond energy from start to finish, there is a general trend of loss of usable energy and a decrease in biomass of bond energy. 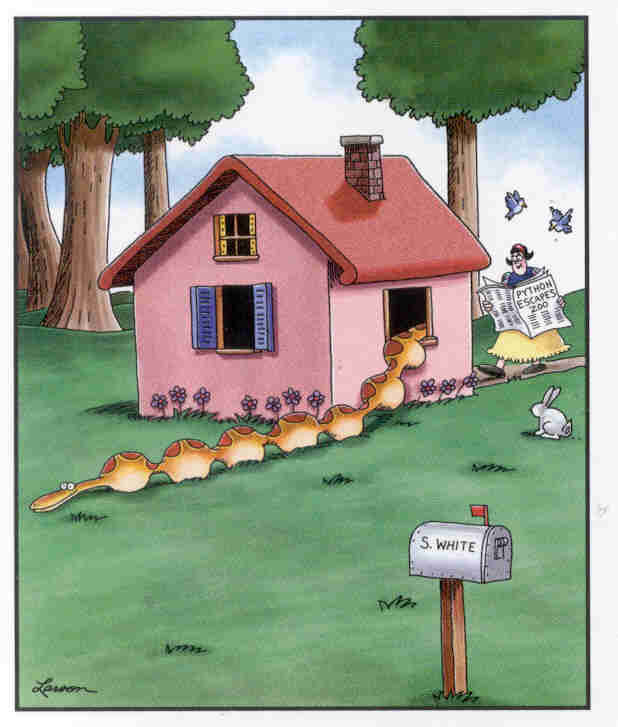 As a result of their activities in grade 7, all students should develop understanding of:

5E The Living Environment :Flow of Matter and Energy

In the middle grades, the emphasis is on following matter through ecosystems. Students should trace food webs both on land and in the sea. The food webs that students investigate should first be local ones they can study directly. The use of films of food webs in other ecosystems can supplement their direct investigations but should not substitute for them. Most students see food webs and cycles as involving the creation and destruction of matter, rather than the breakdown and reassembly of invisible units. They see various organisms and materials as consisting of different types of matter that are not convertible into one another. Before they have an understanding of atoms, the notion of reusable building blocks common to plants and animals is quite mysterious. So following matter through ecosystems needs to be linked to their study of atoms.

Students' attention should be drawn to the transfer of energy that occurs as one organism eats another. It is important that students learn the differences between how plants and animals obtain food and from it the energy they need. The first stumbling block is food, which represents one of those instances in which differences between the common use of a term and the technical one cause persistent confusion. In popular language, food is whatever nutrients plants and animals must take in if they are to grow and survive (solutions of minerals that plants need traces of frequently bear the label "plant food"); in scientific usage, food refers only to those substances, such as carbohydrates, proteins, and fats, from which organisms derive the energy they need to grow and operate and the material of which they are made. It's important to emphasize that the sugars that plants make out of water and carbon dioxide are their only source of food. Water and minerals dissolved in it are not sources of energy for plants or for animals.

Plants, algae (including  phytoplankton), and many micro-organisms use the energy from light to make sugars (food) from carbon dioxide from the atmosphere and water through the process of photosynthesis, which also releases oxygen. These sugars can be used immediately or stored for growth or later use. Animals obtain food from eating plants or eating other animals. Within individual organisms, food moves through a series of chemical reactions in which it is broken down and rearranged to form new molecules, to support growth, or to release energy. In most animals and plants, oxygen reacts with carbon- containing molecules (sugars) to provide energy and produce carbon dioxide; anaerobic bacteria achieve their energy needs in other chemical processes that do not require oxygen.  8LS1.C

Food webs are models that demonstrate how matter and energy is transferred between  producers (generally plants and other organisms that engage in photosynthesis), consumers, and decomposers as the three groups interact—primarily for food—within an ecosystem.  Transfers of matter into and out of the physical environment occur at every level—for example, when molecules from food react with oxygen captured from the environment, the carbon dioxide and water thus produced are transferred back to the environment, and ultimately so are waste products, such as fecal material. Decomposers recycle nutrients from dead plant or animal matter back to the soil in terrestrial environments or to the water in aquatic environments. The atoms that make up the organisms in an ecosystem are cycled repeatedly between the living and nonliving parts of the ecosystem.  8LS2.B

Students will learn about carrying capacity in social studies as well as various biomes and  ecological succession.

[8] Anderson, C., Sheldon, T., Dubay, J. (1990). The effects of instruction on college nonmajors' conceptions of respiration and photosynthesis.Journal of Research in Science Teaching, 27, 761-776.

[9] Anderson, C., Sheldon, T., Dubay, J. (1990). The effects of instruction on college nonmajors' conceptions of respiration and photosynthesis.Journal of Research in Science Teaching, 27, 761-776.

[10] Anderson, C., Sheldon, T., Dubay, J. (1990). The effects of instruction on college nonmajors' conceptions of respiration and photosynthesis.Journal of Research in Science Teaching, 27, 761-776.

[11] Anderson, C., Sheldon, T., Dubay, J. (1990). The effects of instruction on college nonmajors' conceptions of respiration and photosynthesis.Journal of Research in Science Teaching, 27, 761-776.

Students were running around the gym with paper lunch bags collecting 3cm paper squares. Most of the squares were white but some of them were cut from colored paper.

Another set of students raced out onto the floor, tagged the other students on the shoulders. When tagged, the students carrying the bags handed the bags to the shrew students. The hunt continued for 15 seconds.

Three hawks "flew in" from the sidelines. Tagging the shrews, who handed over their collections of grasshopper feeding bags.

Twenty grasshoppers had started the activity. One lone hopper remained. Six shrews had fed upon the insects, two survived the hawks' attack.

Jasper, a hawk, raised his hand, full of paper sacks. "I've got eight stomachs! And man am I full!"

It took a minute to de-escalate the class, but Mr. R got the students on the floor of the gym sitting still. They debriefed about what it was like to be a hopper, shrew or hawk. Then the class transitioned back to the classroom.

When they got back to the room, Mr. R asked the to sit in their lab groups. Only three of the groups had a hawk and each had multiple "stomachs" in hand. Mr. R then rearranged the groups so they were clustered around those with hawks.

Taylor raised her hand, "There are different colored squares, most of them are white but there are a few multi-colored pieces too."

"You need to count the squares and keep track of how many are white and how many are colored." R instructed. A collective grown spread across the room. "You know science can be hard work sometimes, so work hard." Mr. R encouraged.

The students started making piles of their squares.

"What do the squares represent?" probed Mr. R.

"They are food." Austin replied.

"But why are there different colors? And why are most of them white and only a portion multi-colored?"

There was a pause in the classroom.

Hans lifted his hand, "I think it shows the different things they eat. The white is one thing and the colored squares are something else?"

"That's correct. The white is the majority of what grasshoppers eat. What do they eat? What is their diet made of?

"In a food web, how do these organisms, the grasshopper, the shrew and hawks fit together?" probed Mr. R.

This lead into a discussion about producers and consumers, the various levels of each in a food web. There was also another discussion about pyramids and how food wound its way to the top of the pyramid from the base.

"Where does this web start?" asked Mr. R.

"It starts with the grasshoppers," said Amanda.

Torrie countered, "No, it starts with the food the grasshoppers have eaten."

Jose then chimed in, "I think it starts with the sun, remember the plants get their energy from the sun."

"Great thoughts, but what if I told you the multi-colored squares represented pesticides. What are pesticides?"

Torrie answered, "My dad sprayed our bushes in front of the house with pesticide, he said, 'cause they were being eaten by bugs."

"So, what did the pesticides do to the bugs?"

"It killed them dead," replied Torrie.

"Gina, you were the lone hopper left. How many white and colored squares did you have in your bag?"

Mr. R said, "I'm sorry Gina, if you were a grasshopper that ate 30 colored squares, you would be dead. Those colored squares represented pesticide and that level would kill you."

"AHHHH," Gina gasped as she grabbed her throat. Everyone laughed.

"Tim and Henry, you were surviving shrews. How many stomachs did you have?" asked Mr. R.

Tim replied, "I twisted my knee in gym class. I only got one hopper and I had 110 white and 20 colored squares. Did I make it?"

Hank answered, "I caught four hoppers and had around five hundred white squares. I got tired of counting them, but I know that I had 150 colored squares."

"Why did I die and Tim didn't?" Hank demanded!

"Why do you think that Henry died and Tim made it out alive?" Mr. R posed the question to the class. "Talk with your lab mates and come to an answer."

The class erupted into a discussion. In half a minute, Mr. R brought them back to focus. "Okay, what are some ideas?" And the class went on to discuss the difference between Tim and Henry's condition. Eventually, the fact that Henry had more pesticide than Tim was the conclusion. Even though they were both shrews, the amount of toxin was different.

"Hawks let's hear it. What about your results?"

The class continued looking at data and results, which hawks lived or not. The level of pesticide and the food web location was the focus of the remainder of the class.

Eventually, the students worked their way to the idea of biomagnification. The farther up the food web the pesticide went, the more concentrated it became, leading to dire consequences for those organisms at the top trophic levels. The students were able to play act the food web, and come back to deal with quantifiable data, come to conclusions based on those numbers.

Activities from Bottle Biology Learn how to explore science and the environment with soda bottles and other recyclable materials. Create Decomposition Columns to Bottle Gardens: (lots of activities using pop bottles)

Evaluation: Draw a diagram of a food web.

Application: Using yarn and pictures of plants and animals, glue the animals to a piece of poster paper. Have students use the yarn to demonstrate the flow of energy through the web.

Recall: Which of the following organisms would be a producer?

There should be a lot of outside activities with this standard. Rural, suburban and urban settings are full of nature. Teachers need to access any corners of the campus to get outside and to address the nature deficit.  Louv, R. (2008). Last child in the woods. Chapel Hill: Algonquin Books.  The author correlates the trend that children are spending less time outdoors, resulting in a wide range of behavioral issues.