All living organisms are composed of one or more cells which carry on the many functions needed to sustain life.
Grade:
7
Subject: Science
Strand: Life Science
Substrand: Structure and Function in Living Systems
Benchmark: 7.4.1.2.1 Functions of Cells

Recognize that cells carry out life functions, and that these functions are carried out in a similar way in all organisms, including animals, plants, fungi, bacteria and protists.

Recognize that cells repeatedly divide to make more cells for growth and repair.

Use the presence of the cell wall and chloroplasts to distinguish between plant and animal cells.

Living things are composed of cells which are responsible for life functions.

Cells are the building blocks of life.   The focus of study should be on the idea that basic functions of organisms are carried out in cells.  These functions include growth and repair, obtaining and using energy, transport of materials.  Cells of plants and animals can be distinguished by the presence of  a  cell wall and chloroplasts in plant cells. 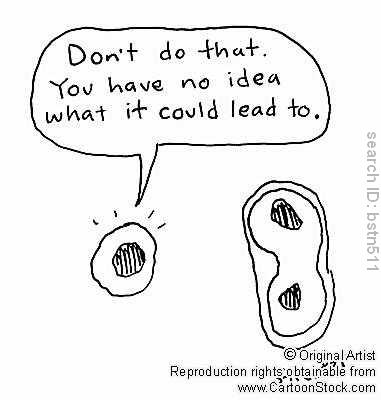 The cartoon, from this site, can be download and used free of charge by individual teachers/educators.

Once they have some "magnification sense," students can use photomicrographs to extend their observations of cells, gradually concentrating on cells that make up internal body structures. The main interest of youngsters at this level is the human body, so they can begin with as many different kinds of body cells as possible-nerve, bone, muscle, skin-and then move on to examining cells in other animals and plants. This activity can show students that cells are the fundamental building blocks of their own bodies and of other living things as well. Also, once students see that tissue in other animals looks pretty much the same as tissue in humans, two important claims of science will be reinforced: the ubiquity of cells and the unity of nature.

All living things are made up of cells, which is the smallest unit that can be said to be alive. An organism may consist of one single cell (unicellular) or many different  numbers  and types of cells (multicellular). Unicellular organisms  (microorganisms), like multicellular organisms, need food, water,  a way to dispose of waste, and an environment in which they can live.

Within cells, special structures are responsible  for particular functions, and the cell membrane  forms the boundary that  controls  what  enters and leaves the cell. In multicellular organisms, the body is a system of multiple  interacting  subsystems. These subsystems are groups  of cells that  work  together  to form tissues or organs  that  are specialized for particular body functions.  8LS1.A

"Good afternoon and welcome to the nucleus. Today we are taking a tour of the cell's control center with our good friend Mike Tokondria and Ronald Ribosome," began Geoffe. Geoffe had volunteered to be the talent for this part of the podcast assigned by Ms. D.

"Mike, what is that structure over there? It kind of looks like tube socks that my brother Steve has in his drawer."

"Well, Mr. Golgi, those are chromosomes. They are where the genes that control the cell are found. Every cell in a person's body has forty six of them."

"Mike, how can every cell have forty six of them, inside of the nucleus, when the nucleus is inside the cell and the cells are inside the body?" asked Ronald. His real name was Reggie, but he kind of like Ronald, anyway.

Ms. D had assigned the students the podcast, "Interview with an Organelle" a couple days before. The past three days had seen the group gathering information about the cellular parts, writing scripts, rehearsing and learning how to run the software that would record the podcast.

With the help of the media center/technology person in the building, she had come up with the idea for the podcast. Students thought it would be cool to get their information on the web, so that other 7th graders could learn about organelles.

Many of the students had created movies on home computers, so instruction on editing podcasts went smoothly. Some had even used programs similar to this in recording music at home. Ms. D, found the software to be simple enough to use and with the media center instructor's help, she found it more like 'cut and paste' in word processing than anything.

The days prior to production were full of script writing and rehearsal. The podcast had to be between ninety and one hundred twenty seconds, so stopwatches and cell phone timers were out in abundance. Ms. D encouraged them to rehearse and rehearse so it didn't sound like they were reading, rather having a conversation.

Production went well. The students recorded mutliple takes for each segment: the 'catchy grabber', 'the introduction to who and where' the podcast was being produced, the 'content' and the 'commentary' about the importance of the cell part to the survival of the cell.

Rubrics and checklists are important to Ms. D. The rubric she provided helped the students write the script and make sure they had all the necessary information in the podcast. It also address technical issues like dead air and acceptable volume levels.

With the rehearsal, a useful tool in the rubric, a well written script, the students ran through production in a day. Even with the multiple takes for each segment, it was easy to go back and decide which was the best.

A quick click of the mouse and Ms. D had the podcasts ready for internet broadcast. She placed the files on her web page and threw them out on the web. Once the podcasts were available to the public, she sent emails home through the school grading application to let parents know where and how to listen to Mike, Ronald and Mr. Golgi.

Use of digital imaging software to highlight cell structures

Create an audio or video podcast about a cell part

Cameras/flip videos for students to record clips of their models.

microscopes for seeing the various stages of cell division

Hardware cameras that connect to microscopes to show students what chloroplasts look like and how plant cells are different from animal cells.

Work with art teacher to help students make scientific illustrations that convey information to the observer.

What is TRUE about the size and shape of cells?

A.  All cells are the same size and shape.

D.   Different cells can have both different sizes and different shapes.

Which of the following parts of an animal's body are made of cells?

A.  The skin, but not the lungs

B.  The lungs, but not the skin

C   Both the skin and lungs

D.  Neither the lungs nor the skin

Using a Venn Diagram with plant and animal cell parts as the topic. The intersection of the circles is structures you find in both types of cells.

Using the SmartBoard have students model cell division with chromosomes to move and manipulate.

Using students as representatives of energy flow, have them demonstrate how energy flows through a system starting with a plant cell and ending with an animal cell.

Have students model cell division with themselves as chromosomes.

Have students tell/draw/cartoon the story of a cell's life and death.

Have students model cell division using pipe cleaners/pop it beads as chromosomes. They must demonstrate the various check points.

Students write an essay that explains the reason of cell size.

The teacher will have microscopes set up at lab stations around the room. Students will travel from scope to scope, identifying the stage of cell division.

Questions could be used as self-reflection or in professional development sessions.

Are we teaching for understanding or are we just having students memorize parts and steps?

Are we making sure students understand that all organisms including fungi, bacteria and protist carry out life functions?

What technology, both digital & non-digital is availabe to help students understand and visualize cells and cell processes?

If observing a lesson on this standard what might they expect to see.

In 2002, McREL conducted a synthesis of recent research on instructional        strategies to assist students who are low achieving or at risk of failure. From this synthesis of research, McREL identified six general classroom strategies that research indicates are particularly effective in helping struggling students achieve success.

Creating models or diorama's allows at risk students to show true abilities without concentrating on the written word to show their understanding of concepts.

Herr, N. (2007). The sourcebook for teaching science. This page contains strategies to help teachers better attend to the needs of their ELL learners. These strategies are grouped according to the following learning tasks: listening, visualization,       interpersonal communication, laboratory, demonstrations, reading and writing, instruction and vocabulary.

The same type of teaching and learning experiences do not work equally effectively for all cultural groups.

Students should be instructed to create models and label parts in duel languages.

This site hosts a English to Ojibwe and Ojibwe to English dictionary that may be used to look up meanings to vocabulary words.

Science instruction should not be isolated from the rest of the students' lives.  The contextualization of tasks can make a difference in performance.  Many science experiences are those of a special world, confusing, often couterintuitive and counter to daily experiences.  When students can participate in and observe science in the ordinary world in which they live, they are more likely to learn as well as come to appreciate science as a way of knowing.  When this can be embedded in a cultural context the possibilities for new understanding and connections become even stronger.

Again projects should be constructed and labeled in duel language.