Offspring are generally similar to their parents, but may have variations that can be advantageous or disadvantageous in a particular environment.
Grade:
3
Subject: Science
Strand: Life Science
Substrand: Evolution in Living Systems
Benchmark: 3.4.3.2.1 Inherited Similarities

Give examples of likenesses between adults and offspring in plants and animals that can be inherited or acquired.

For example: Collect samples or pictures that show similarities between adults and their young offspring.

Give examples of differences among individuals that can sometimes give an individual an advantage in survival and reproduction. 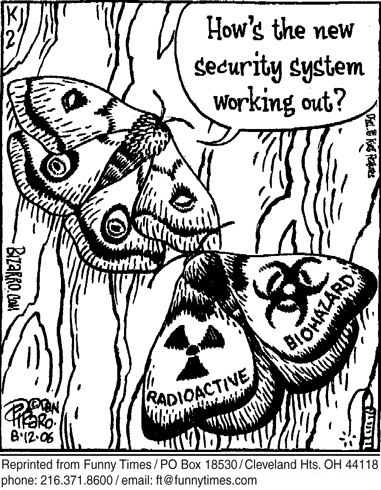 3.4.3.2.1  Give examples of likenesses between adults and offspring in plants and animals that can be inherited or acquired.

3.4.3.2.2  Give examples of differences among individuals that can sometimes give an individual an advantage in survival and reproduction.

Each plant or animal has different structures that serve different functions in growth, survival, and reproduction.  For example, humans have distinct body structures for walking, holding, seeing, and talking.

The Living Environment: Variation in Characteristics

Sometimes the differences in characteristics between individuals  of the same species provide  advantages in surviving, finding mates, and reproducing.  5LS4.B

The College and Career Readiness Anchor Standards can be incorporated into this standard:

Students can write about and justify why animal's characteristics in a species will give them an advantage over others. (Benchmark 3.4.3.2.2)

Students can journal about their prior knowledge of how offspring are similar to their parents. (Benchmark 3.4.3.2.1)

Students can create and describe imaginary animals with specific traits that give them an advantage in survival.  (Benchmark 3.4.3.2.2)

It is springtime and Mr. Smith and his 3rd graders are ready board the bus to take a field trip to the Minnesota Zoo.  The zoo's Baby Farm Animals exhibit is just getting underway.  The students are armed with their science notebooks and digital cameras and their task is to observe baby animals and their parents.  In cooperative groups of three, students will take pictures of baby animals with their digital cameras and also sketch 2 - 4 of these animals in their science notebook.  They also must go on a hunt to see if they can find the baby animals' parents.

As students are making observations, they notice that some animals look different than their parents.  Mr. Smith poses questions to his students to get them thinking about why that might be and how that might benefit them.  The following day when they return to school, students will pick one animal and fill out a Venn diagram identifying how the baby is similar and different to its parent.  Students will upload their pictures to Voicethread and record their group talking about how the baby animal is the same and different from the parent animal.  Mr. Smith will upload these Voicethreads to the class webpage to share with parents and community members.

Battle of the Beaks

In this lesson, students learn about adaptive advantage, based on beak function, by simulating birds competing for various foods. (3.4.3.2.2.)

Students learn about variation, reproductive isolation, natural selection, and adaptation through this version of the bird beak activity.  May need to be modified for younger students.  (3.4.3.2.2)

Take a nature walk in the spring and take digital pictures of adult animals and/or their offspring.  (Benchmark 3.4.3.2.1)

Students will collect samples or pictures of plants and animals that show similarities between adults and their young offspring. (3.4.3.2.1)

Purpose: To expand students' knowledge of animal features and behaviors that can help or hinder their survival in a particular habitat.

Context: As students approach this Animal Adaptations lesson, bear in mind that, according to research, most lower elementary school students are still forming a basic understanding of how animals survive in their respective environments.  For example, many students understand a simple food link between two animals, but many still assume that animals are still independent of each other and depend on humans to provide food and shelter.  Some students are unaware that many animals struggle to obtain adequate amounts of their particular food(s) and cannot simply change their diets as other food becomes available.

Purpose: To develop an understanding of the role both nature and nurture play in determining an individual's traits.

Students explore the biosphere and its associated environments and ecosystems in the context of creating a model ecosystem, learning along the way about the animals and resources.  Students learn that animals, plants and other organisms have different physical characteristics that make them more adapted to a particular environment. However, different types of organisms can live together in similar environments.  Birds have hollow bones (making them lighter) and feathers that help them fly.  Large animals need support and bone structure to walk; as a result, they have backbones and legs. Still, both of these animals might live in a forest.  Some physical characteristics make an organism less adapted for other environments.  For example, whales have blubber so they can withstand cold temperatures and other mammals have thick fur, which protects them from the cold.  Because of these characteristics, these animals would not survive very well in a hot desert environment.  Also, some animals can adapt to changes in their environment by changing their physical characteristics or changing their surroundings

*Information about investigations and correlations can be found at the following links:

Acquired traits: traits that are the result of a person's experiences in the world, but are not inherited or passed on the next generation (examples: acquired knowledge, amputation, tattoo, docked tail, leaf damage, disease).

Adapt: to change so as to fit a new or specific use or situation.

Behavior: things that organisms do.

Characteristic: a special quality or appearance that makes an individual or group different from others.

Environment: the surroundings of a plant or animal.

Function: how a structure works or how it is used by an organism.

Habitat: where an organism naturally lives.

Inherited: to receive by genetic transmission.

Inherited traits: traits that are genetically inherited and passed from generation to generation.

Offspring: the young of an animal, or plant.

Organism: any living thing, including plants and animals.

Population: a group of one species of organism living in a particular area or habitat.

Structure: any identifiable part of an organism.

Young: being in the early stage of life, growth, or development.

This is a game that allows students to identify various bird beak characteristics and how they are advantageous in birds' food choices. (Benchmark 3.4.3.2.2)

This is a game that allows students to explore differences in bird characteristics that are advantageous in habitats and to create birds that will survive in various habitats. (Benchmark 3.4.3.2.2)

Provides access to the highest quality practices in reading and language arts instruction by offering the very best in free materials, including graphic organizers appropriate for science instruction.

A collaborative, multimedia slide show that holds images, documents, and videos and allows people to navigate slides and leave comments in five ways: using voice (with a mic or telephone), text, audio file, or video (via a webcam). Share a VoiceThread with friends, students, and colleagues for them to record comments too.

This software allows students to create graphic organizers and visual representations of ideas.

In this set of outdoor games, learners play the role of monkeys that are trying to get enough resources (food, shelter, and space) to survive.  They play several simple games which involve strength, quickness, coordination, intuition, and luck in order to acquire these resources.  The games focus attention on the participants' individual variations in these areas. (Benchmark 3.4.3.2.2)

Purpose: To study how offspring are very much, but not exactly, like their parents in the context of the periodical cicadas.

Context: The arrival of the periodical cicadas in the spring of 2004 provides a good way to review with your students the concept of heredity and how offspring are very much, but not exactly, like their parents.  Making use of an interactive slide show, this lesson provides students with an opportunity to consider the concept of heredity in the context of the periodical cicadas.  It should probably be taught after you have already introduced this concept to students by having them consider organisms with which they are more familiar - like themselves, their classmates, and their pets.

The correct answer is C.  Question taken from NAEP test. 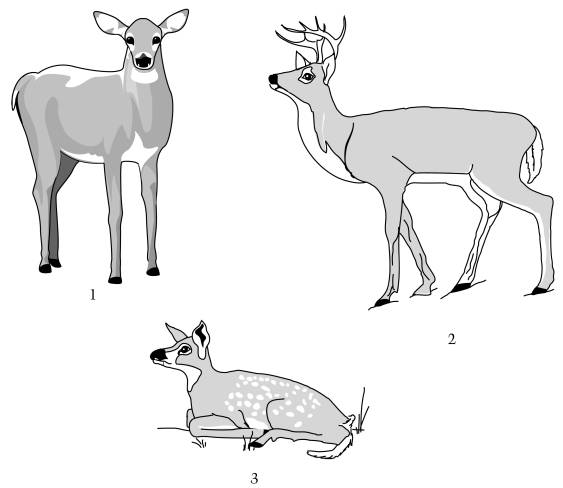 A.  The deer in the pictures are numbered.  Put the number next to the name that identifies each deer.

Key for #2. The deer in the pictures are numbered. Put the number next to the name that identifies each deer. 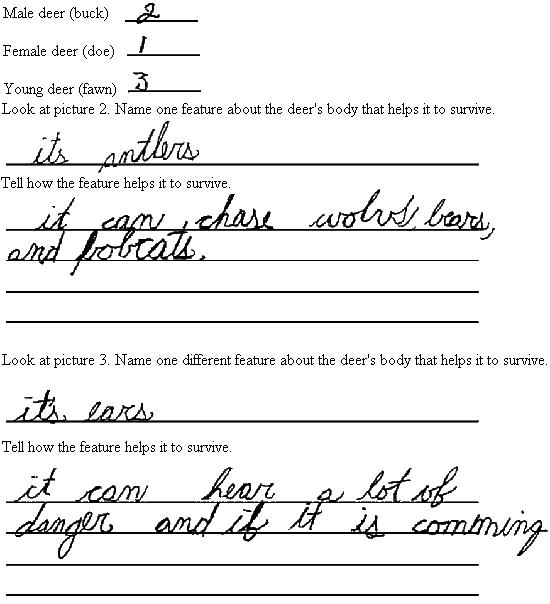 Student response addresses all seven parts of the question correctly: identification of all three deer, features of the buck (antlers), and features of the fawn (ears), with explanations of how those features help them to survive.  The buck has antlers to keep away predatory animals; the fawn has ears to detect approaching enemies.

A small, short-furred, gray animal called a divo lives on an island.  This island is the only place on Earth where divos live.  The island habitat is warm and provides plenty of the divos' only food - tree ants.  The divos live high in the treetops, hidden from predators.

One year, the habitat experienced a drastic change that lasted for most of the year.  It became very cold and even snowed.  All of the ants died.  The trees lost their leaves, but plenty of seeds and dried leaves were on the ground.  Circle any of the things you think happened to most of the divos living on the island after their habitat changed.

A. The divos' fur grew longer and thicker.
B. The divos switched to eating seeds.
C. The divos dug holes to live under the leaves or beneath rocks.
D. The divos hibernated through the cold period until the habitat was warm again.
E. The divos died.

Explain your thinking. How did you decide what effect the change in habitat would have on most of the divos?

Answer: the best answer is E: The divos died. Most of the divos probably died because the physical structures, physiology, and behaviors they were born with no longer fit the changed environment.

Three friends were arguing about what would happen if a population of rabbits from a warm, southern climate were moved to a cold, northern climate.  This is what they said:

Bernie: "I think all of the rabbits will try to adapt to the change."

Leo: "I think most of the rabbits will try to adapt to the change."

Phoebe: "I think few or none of the rabbits will try to adapt to the change."

Which person do you most agree with and why?  Explain your ideas about adaptation.

Answer: The best answer is Phoebe's: "I think few or none of the rabbits will try to adapt to the change."  The key word is "try."  Adaptation is not intentional.

Using inquiry circles, provide students with books such as The Ugly Duckling by Hans Christian Andersen and Are You My Mother? by P. D. Eastman.  Have students create questions and predictions throughout the read-aloud.  Discuss why the characters in the stories didn't fit in, in their surroundings.  Use the inheritance of characteristics to identify how the characters knew they had found their families.  Write a class book about an animal that tries to find its family by comparing characteristics.

Students can be introduced to nature vs. nurture discussion (inherited vs. learned).  Make a list of traits that they have and have them decide if these are inherited traits or learned behavior. (Benchmark 3.4.3.2.1)

Give students pictures of adult and offspring organisms (plants and animals).  Have students match the offspring to an adult.  Ask probing questions such as: Why did you put those two together?  How are they the same and different?  (Benchmark 3.4.3.2.1)

Have children make a list of their characteristics (eye color, hair color, curled tongue, double jointed, good at drawing or sports, etc.) then take the list home and discuss with their parents who they inherited these traits from.